Title says it all. Bisante found a video of Damon calling him gay (do you really blame him though?). Scene Princess and former as well as present StickyHouse invitee Amor Hilton popped a liver-friendly little helper and talked shit on her former roommate Kelly Anne Chaos. Earlier this month, Kelly had posted a tell-all blog about her time living with Amor.

[CLICK TO KELLY’S BLOG IN READ IN FULL RESOLUTION] 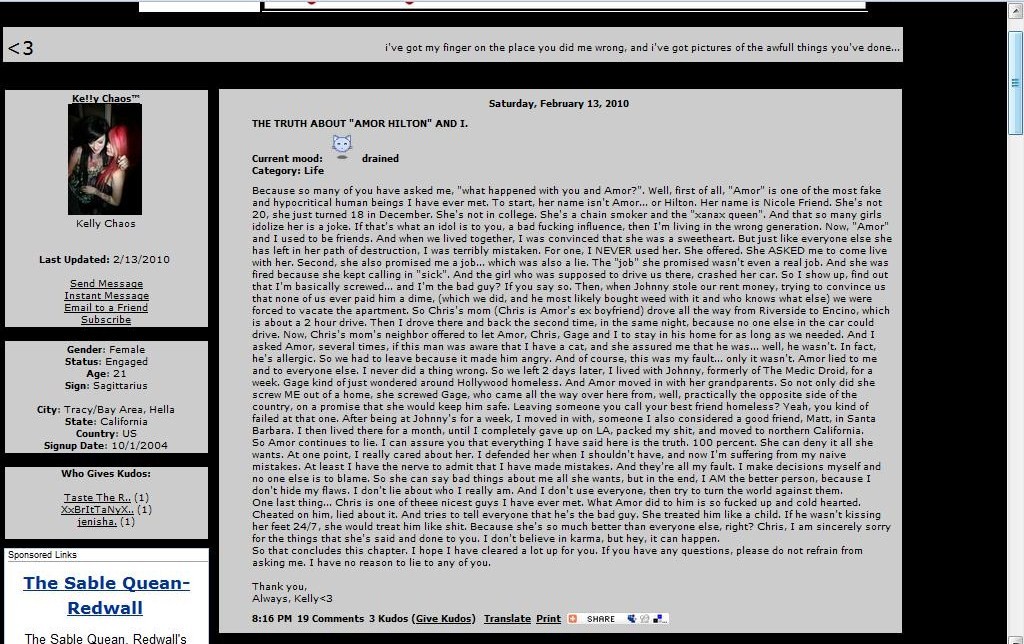 [CLICK TO READ KELLY’S BLOG IN FULL RESOLUTION]
Let this be a lesson, kids.  Don’t let internet franz be roommates.  Do their drugs, fuck them bloody, and move on.  Oh, and are we the only one who finds it a little creepy that Amor is pictured in Kelly’s profile pic as she published this blog post?

So I was on my twiteer and i saw Daniel posting a very funny or shall I say…insulting tweet and this kid came up and started arguing with him.

And then even J* comes up and starts to talking shit to the kid. ohwell dramadramadrama dont we all love it?

So is Daniel funny or just a completely snobish and sucker of J* ?

Something that caught my eye
by gosh-by-golly if you aren’t a party girl, then why do you constantly tweet about shit and have photos on your myspace PARTYING? right amor, keep thinking you have morals and live in in your little world where everyone likes you and is friends with you. come back to reality sweetheart, you need a little dose of it to keep thinking you’re hot shit. ^ i didn’t realize it’s okay to fuck someone you consider as your brother/best friend.

oh but i’m sure in your standards fucking all your “boys” is how you are even friends with them.

You’re probably a girl they fuck, not have sex with like they told you the difference. i’m sure if they actually came to you, BITCH SWALLOW IT. i’m sure your butterteeth would whiten. no dentist could scrape that shit off.  so seriously consider it<3 I think Ruben is right and audrey is a homophobe and disgrace to the social causes and values she tries to represent.

If you haven’t read the post on what Kelly blogged about Amor you should probably go read that so this makes more sense. Amor killed her cat?? That’s pretty fucked up and disgusting.
If this all ended with a fist fight that would be pretty awesome.

Sorry for the failpost but,

What’s worse than an internet fag? Two internet fags of course. Especially when they are arguing because it gets nasty real quick. Michael, a gay internet pixie is calling out mr. Brandon Hilton. After the first confrontation on Myspace, Michael prompted Brandon to delete him from friends, at which Michael, apparently, got very mad and started bashing on him and his music. If anyone has screen caps of their convo can you post?

WHO WILL WIN? vote?