Amor Hilton, who was 4 months pregnant with the spawn of Jonn Hock, today posted a Myspace bulletin announcing her miscarriage. 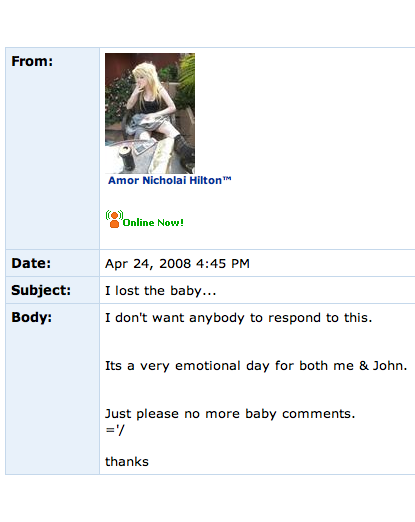 StickyDrama was crestfallen as the realization dawned upon us that we woud be denied our highly-sought Live abortion, which we have never had the fortune to post. Moreover the public nature of the miscarriage announcement, much like the public nature of Amor’s pregancy and relationship with Hock, entitles us to ask certain questions, such as:
-Was she ever really pregnant? The entire pregnancy could have been nothing more than a publicity stunt: Amor didn’t seem to be gaining much weight, and the ruse couldn’t have lasted much longer.
-Who the fuck ends their miscarriage announcement with an emoticon: =/
-If she was pregnant, did her smoking and tattoos affect her health to the point of miscarriage? Could the stress of their fighting have been a factor as well?
-Without the responsibilities of fatherhood, for how much longer will Hock remain with Amor? By all accounts he’s ready to hop along to the next vagina with an apartment. Right Chelsea?
-Assuming they do separate, will Hock or Amor go on cam drunk, talking shit about each other? We would hope so! God owes StickyDrama at least that much, for not delivering on the Live abortion.
http://www.stickam.com/amornicholaihilton