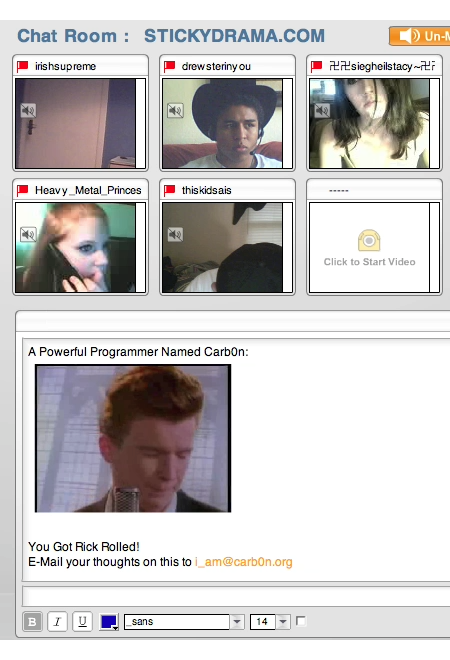 For those readers unfamiliar with this lulzy form of assault, “rickrolled” refers to forcing one’s victims to watch the corny music video “Never Gonna Give You Up” by Rick Astley. According to an April 2008 poll by SurveyUSA, at least 18 million Americans have been rickrolled.
The attacks came suddenly, without any of the threats or boasts which little hackers and script kiddies tend to make. Targets were confined to the larger chatrooms; besides StickyDrama, Singles Chat, Gay & Bi, Show N Tell, and LTN*AZN*BLK*WHT were also victims of the exploit.
There is some debate as to whether these attacks were actually initiated by Carb0n, or whether Carb0n is the person who wrote whatever program exploits the vulnerability in Stickam’s code. Many users on Stickam have the display name Carb0n.
In addition to Carb0n’s credit which StickyDrama managed to screen-record during the first round, some users reported seeing the following message during subsequent attacks: “Stickam is exclusively for jews, niggers and emo fags who drag the blade from side to side.”

When Crocker Needs A New E-Boyfriend…