A pedophiliac cyberstalker known as “Router” has been identified as Garrett Graff, 22, of Livonia, Michigan, according to one of his own victims seeking justice.  Livonia is a large suburb located 13 miles northwest of downtown Detroit. 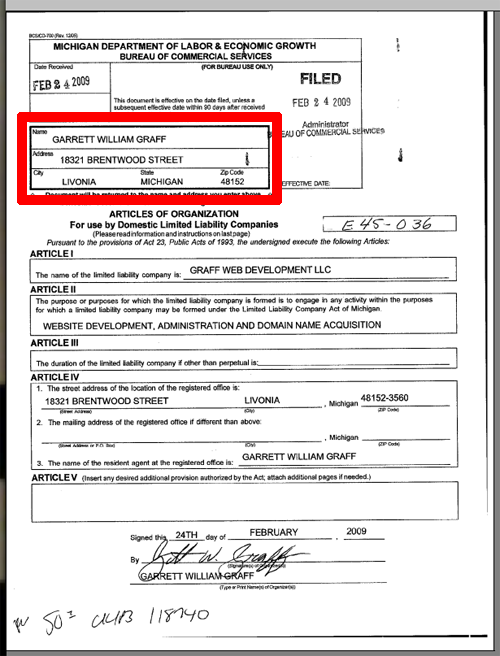 First registering on live streaming social network Stickam under the name “Psychotic Router,” Router targets young boys exclusively.  Some of the victims were in their late teens, but others were as young as 12, 10, and 9 years old.  In this post we will explain his modus operandi, and present 3 specific cases in which we feel enough evidence exists for authorities to act upon.

Studies have shown that most pedophiles are below average intelligence.  Not Router.  His calculated strategies make him adept at the art of terror, and his preferred tool is blackmail.  If Router finds an image or video of a young boy naked, he approaches the boy and threatens to mail his nudes to his family unless the boy submits to more sexually explicit performances.  If he doesn’t have information or images to blackmail a victim, he uses deception.  Posing as a friendly Stickam user, he strikes up conversations with potential victims in order to learn information about them, a technique known in online parlance as “socialing.”  He often uses a video recording of a young female to fool boys into believing they are befriending a girl; if his victim is gay, Router poses as an attractive young boy.  Thus beautified, he asks a victim to get naked on webcam or send nudes.  Of course, at 22 years old and quite rotund, the real Garrett Graff is neither particularly young and definitely not attractive.

But Router might ultimately be hoisted by his own petard.  On his now-disabled website RouterHQ.com, he described how he enticed a 12-year-old boy to perform sex acts on camera; Router attempted to justify his actions by writing that the boy claimed to be 13 years old, circumstances no less disgusting nor illegal than if the boy had been 12. 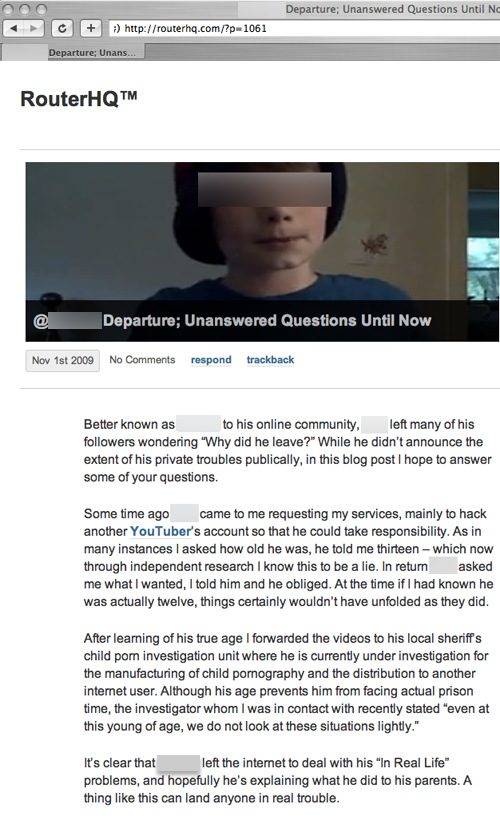 In another case, Router obtained an old screen-recording of a 17-year-old boy.  Instead of deals or enticements, Router immediately made threats against the boy.  In an outrageous perversion of the law, since the victim is under 18 years of age, Router threatened to have the boy arrested for production of child pornography if he did not perform more sex acts.

StickyDrama’s phone calls to the FBI’s San Francisco Bureau confirmed that there is no agent Olivia Estrada at that Bureau, nor probably at any other Bureau for that matter.  But Router’s clever lies are terrifyingly believable.  Citing recent court cases of teenagers on trial for “sexting,” Router often convinces young boys to acquiesce in his demands.  (Situations such as these are yet another reason why StickyDrama believes it is wrong to prosecute teenagers for sending out their own nudes in a non-commercial manner.)

The youngest known victim was 9 years old when Router targeted him.  We do not know much about him besides his age, but have been told that Router fooled him using a loop of an attractive young girl.  While Router apparently never threatened this victim and the naive boy willingly performed for Router, Router’s “branding” and streaming of the recording certainly qualifies as production and distribution of child pornography—note the “Router” watermark in the lower right. 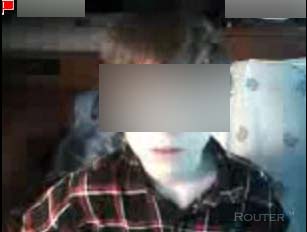 StickyDrama has never been contacted by the boy above, but other victims claim to have spoken with him, and tell us that the experience has left him terribly embarrassed and ashamed.

The victim who sent StickyDrama the above LLC registration form believes Router to be Garrett Graff because, during the course of his getting-to-know-the-victim routine, Router let slip that his real name is Garrett and that he lived in Michigan.  Router also claimed to own a company through which he operated RouterHQ.com as well as StickamSluts.com, for which Stickam sent a trademark infringement complaint.

Router refused to confirm or deny whether the LLC registration form was indeed his.  But shortly after being shown the document, he posted on his blog that he was moving to San Francisco, CA, where he claimed to have been offered a job at technology magazine PC World. A few weeks later he took the blog offline.

In a phone call to PC World, StickyDrama was told that no person named Garrett Graff was employed by the company.  We suspect that Router’s claim was a lie intended to throw us off his trail.

So assuming that Router has been correctly identified, what means of redress are available to his victims?

Stickam’s policy is to encourage its users to make their own complaints with the authorities.  Despite receiving countless complaints about Router and being well aware of his cyberstalking, the company is unable to do much more than ban whatever account he uses—a punishment easily circumvented by re-registering on another account.  The Electronic Communications Privacy Act prevents Stickam from taking more serious action like reporting Router to authorities such as police or the FBI, unless the company is ordered to do so by a court, either by subpoena or search warrant.  So appealing to Stickam (or other social networks) directly will get no real results.

Obtaining a subpoena is fairly quick and simple—if you can pay the 5 to 7 thousand dollars in attorney and court fees, a prohibitively expensive sum for almost any teenager.  The police or FBI can ask a judge to issue a search warrant—if they are convinced to pursue a case.  But law enforcement officials often decline to investigate all but the most horrific cases.  What might be unbearable torture for one of Router’s victims—and unquestionably a crime—might not be a priority for the authorities.  The key to making Router’s case a priority is lodging as many complaints as possible against him.

If you have been victimized by Router, alert the proper authorities.  Do not dial 911 or your own local police; instead make a non-emergency phone call to the Detroit FBI at 313-965-2323. Make a complaint against Router for online harassment and enticing minors to perform sex acts via computer.  Provide an agent with what you suspect to be Router’s identity and address.  Make sure you write down and save the name of the agent with whom you make the complaint.  Ask for and save the case number or reference number.  Then post agency, agent’s name, and case number in the comments of this post.  Hopefully, as more and more victims refer to the same case number, authorities will feel a compelling reason to act.