StickyDrama has been adulting for a minute, but the death of Stickam royalty is a sure-fire way to wake us out of our online slumber.

Stevie Ryan, former Stickam star and actress, was found dead at her residence in the Mid-City district of Los Angeles on July 1, 2017. She was 33 years old.

Ryan had recently posted on social media that she was devastated by the death of her grandfather. She was also rumored to be depressed. Although StickyDrama never met her in person, we did have a telephone call with her back when she broke up with the lovable suckable Adam “Red Pants” Paranoia.  She did seem a bit unstable then, at the very least manic; we would not be surprised if her recent and understandable bout of depression over her grandfather exacerbated a pre-existing mental illness.

Her passing was widely reported in the mainstream media and confirmed by the Los Angeles County Coroner. “Coroner’s records showed an autopsy and investigation determined it was a death by hanging as a result of a suicide by the actress,” the Los Angeles Times reported.

The always gorgeous and usually secretive YouTube entertainer Stevie Ryan confirmed in an exclusive telephone interview that she has broken up with former Stickam employee Adam Paranoia and kicked him out of their apartment. 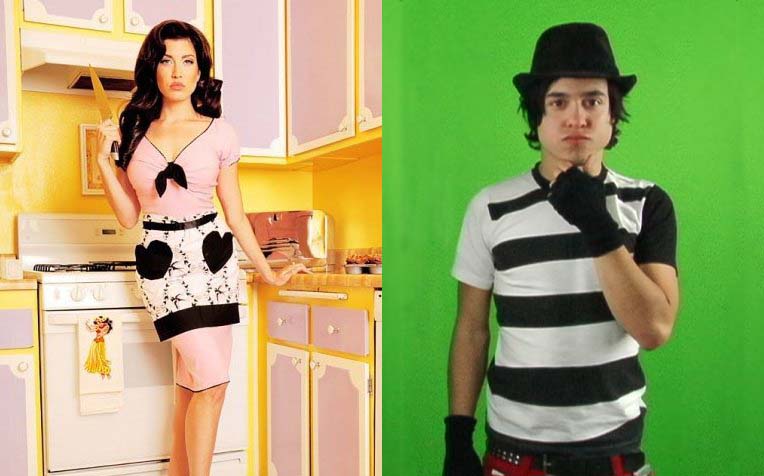 Publicly, Stevie has said almost nothing about her now-kaputz relationship with Adam.  But readers who have been watching her very, very closely noticed several subtle hints.  Or maybe not-so-subtle. 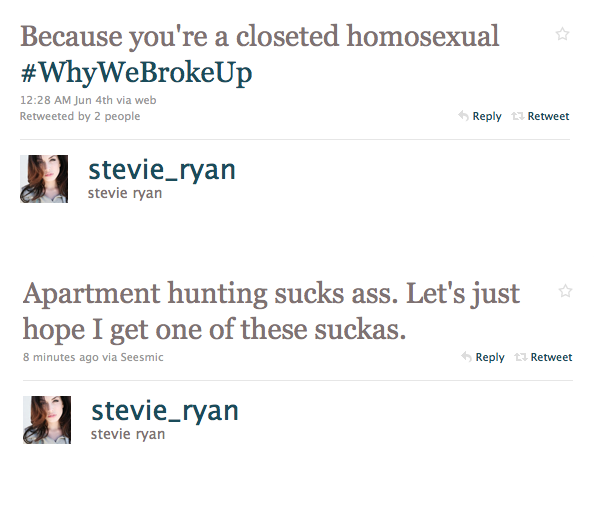 Over the phone, Stevie explained what precipitated the breakup:  Stevie was stricken with a terrible case of food poisoning. 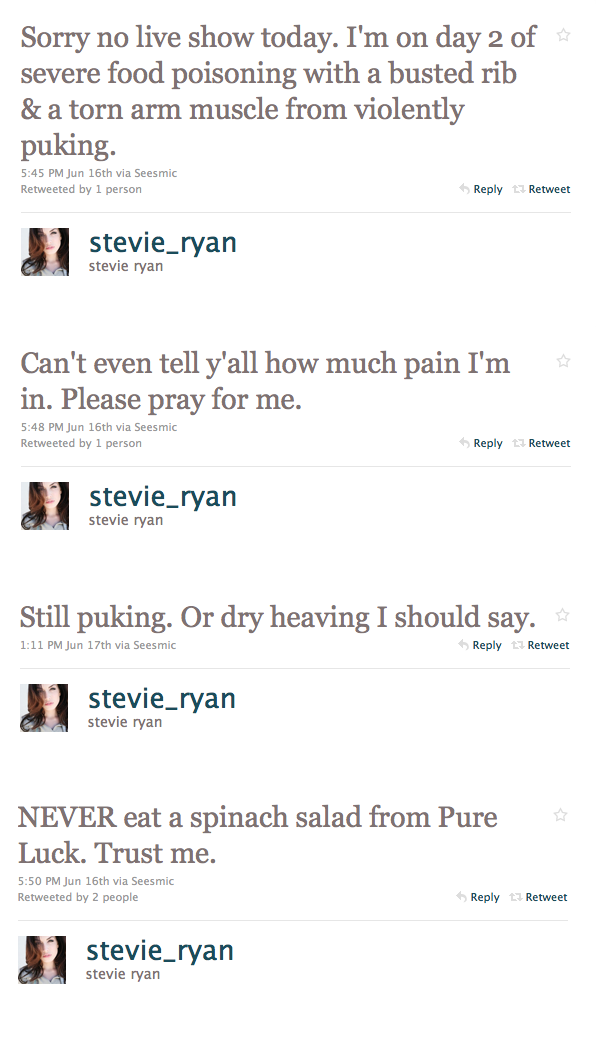 To hear Stevie tell it, Adam practically abandoned her during her illness.  (Make a note, boys:  When your girlfriend is sick, wait on her hand and foot.)  His lack of care towards her caused Stevie to re-evaluate their relationship.  Oh and P.S., it didn’t help that Stevie had been supporting Adam for months.  She told StickyDrama that all his “editing gigs” were all favors that she had arranged for him by means of her own entertainment industry contacts.  (Make another note, boys:  Finance = Romance.) 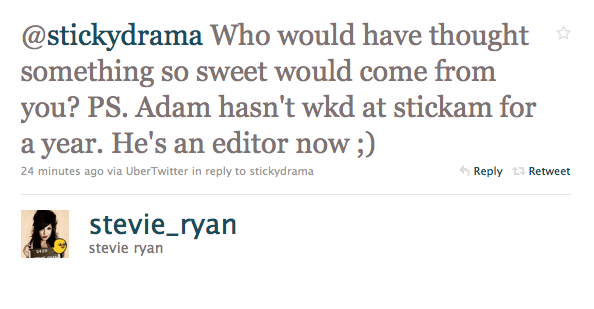 Stevie also described Adam as bitter and jealous of her e-fame and IRL success.  While her career is only looking up, Adam did not separate from Stickam to pursue a more lucrative editing or directing career.  He was among “a bunch of people [who] got laid off because [Stickam] downsized,” Stevie explained to us via txt message.  He was constanty bitching to her, “I’m in your shadow, you outshine me.”   And StickyDrama recalls a year ago, even when the pair were considered Stickam’s “power couple” after John Hock and Amor Hilton’s breakup, Adam could never escape the sobriquet “Mr. Stevie Ryan.”

So what now?  Adam presently shares a studio apartment in LA’s Eastside with two other bachelors, his cousin and Tony Stockert; Stevie plans moving out of the apartment she shared with Adam and returning to the more desirable Westside whence she came.

It all went downhill after you were on our banner, right Adam? Everything Amor wrote was a lie. Except: waking up, enjoying a lovely afternoon, and getting her laptop back. Honestly, I thought she was referring to Amor because in The IRL World at 3:23 she does the “EHLL!!” sound that Sceney Sceneable/Stevie Ryan does.

The other person I could think of was Audrey Kitching. I’m sure there’s much more “pink-haired cheap groupies” but I don’t know of them. CONGRATULATIONS TO JAKE, first time in his life he’s honest!

Peace the hell out, and stay classy.
Unlike gross JakeDesperateForCash/Food/ClothesCrunk. i just about died when i saw this.  antoine vanity? lulz

i know this doesn’t have much relevance but i hope someone finds it as funny as i did. Before playing homewrecker with aspiring director and Stickam employee Adam Scott Franklin, she dated Drake Bell, a Nickelodeon actor trying to make the jump into feature film.   Interestingly enough,  Drake played the lead role of Rick Riker in the horribly bad “Superhero Movie” alongside veteran actor Christopher McDonald, who resides a few floors below StickyDrama at The Rowan building in downtown Los Angeles. It has been alleged that Stevie would also have been cast in the movie—her first feature—if not for Drake’s interference. But how many of Stevie’s fans are familiar with Jessica Amanda Salmonson, who calls herself Paghat the Ratgirl.  Paghat is middle-aged woman who lives in the State of Washington.    A prolific author of lesbian-themed fantasy novels, she runs several websites devoted to lesbianish hobbies such as gardening, caring for her pet rats, making weird knickknacks, and, uh, lesbian stuff. In particular, we raised an eyebrow at Paghat’s so-called review of Stevie.  She must follow Stevie very closely, to be so familiar with drama like Stevie’s on-cam threats toward Kiki Kannibal or her PM death threats to Laura Paige.  And Paghat’s frequent alliteration and complex sentence structure read more like a love poem than a cinematic review:

“Her ethnic “character study” videos (if they may be so likened) are to me harsh, ugly stereotypes that reveal no cinematic intent or value, even though upon those, rather than upon her actual talents, her first flush of fame was predicated.”

“She makes you smile while appreciating her physical beauty.”

Channeling one’s desires into creative works of art is what psychologists call sublimation.  9 pages of pussy-twerkin’ poetic prose is in StickyDrama’s opinion a stalker.

So I was just watching Stevie’s new video, “Caca Face” and I looked at the other people that were watching it, and her username was there. This means that she watches her own videos over and over so she can get more views on her video. HMMMMM.