John Hock approached StickyDrama in our chatroom this past weekend with a message for our readers:   “I still have no Myspace, no Twitter, nothing.  Those are fake people.” 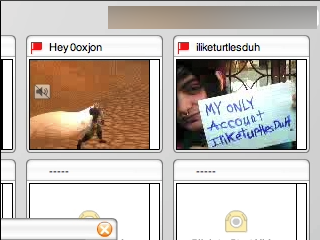 The former internet celebrity, who at the height of his popularity boasted a viewership which rivaled that of Matthew Lush or Kiki Kannibal, fell into disgrace after being banned for webcasting sexually explicit and racially offensive content on Stickam and Blog TV.  In the aftermath of his ignominy, the former King of Stickam claims to have abandoned his quest for e-fame and now seeks to live a normal offline life.  “I’m really trying to change my life, and I’ve been going to church.  Got a job, moved home and am doing very well.”  He asked us to warn our readers of the fake profiles “because a lot of my friends are being tricked by these impostors.”
Several obsessed “stalkers,” to use his words, refuse to let his celebrity fade away and have been creating profiles in his name.  Hock contacted StickyDrama and asked us to make clear that he did not create those accounts, and that he no longer desires online popularity.  His only real account is this one, and he does not plan to use it to become popular again.  He does use one AIM screenname, but cautions that other people have access to it.
Although StickyDrama initially suspected that the John Hock relaying this message was in fact another fake, he verified his identity by passing the “fingers test,” or holding up a specified number of fingers live on cam.
While it might be fair to say that Hock and StickyDrama haven’t always gotten along, we decided to give him a break for once.  He’s no longer doing his stupid show, and hopefully won’t be doing this or that or this or, heavens forbid, that. Let’s see how sincere he is.
http://stickam.com/iliketurtlesduh