Approximately 6 months have passed since the death of 19-year-old Daniel Cespedes, shown here in his coffin and known on Stickam as Mr. Myspace; and speculation remains rampant as to the circumstances leading up to his fatal leap from a 2-story parking garage in Miami. 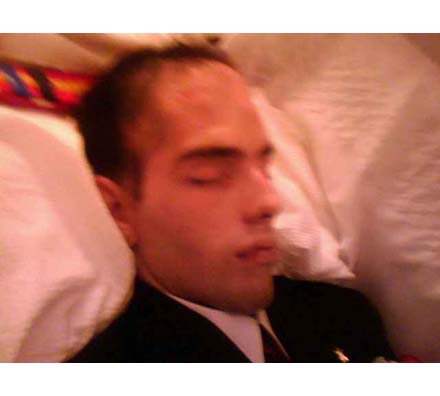 NBC News’ Miami affiliate described “a wild scene” at Aventura Mall as Cespedes made a daring escape attempt moments after his arrest for “lewd and lascivious battery on a minor,” which by now any StickyDrama reader should recognize as statutory rape. In Florida, a person convicted of lewd or lascivious battery would be facing a maximum sentence of 15 years in prison and a minimum sentence of 7 years. Additionally, he would be forced to register as a sex offender throughout the entire country, which can make finding employment or social acceptance difficult.
Facing such punishment, Cespedes made a break for freedom. Taking advantage of a gust of wind which had scattered his arresting officer’s paperwork, Cespedes tried to elude the police by jumping off a 2-story parking garage. Apparently he aimed to land in a garbage dumpster but instead smacked against the pavement. As a result of his severe injuries he lingered in a coma for 3 months, until he died in December.
This point in our story is where fact ends and speculation begins. Rumor has it that Kiki Kannibal had cooperated or plotted with the police to lure Cespedes to Aventura Mall, and thereby was in some way responsible for his death. Her motivation was supposedly revenge for Cespedes’ decision to break up with her. At the time Kiki was 14 years old and Cespedes 19; certain acquaintances of Cespedes (who wish to remain anonymous) have acknowledged his predilection for girls considerably younger than himself.
It certainly cannot be denied that Cespedes and Kiki were dating—and not bullshit “e-dating.” Flesh-and-blood dating, as proven in the following pics sent to us by Cotton Candy Cunt:

However, evidence still on his Stickam profile suggests that Kiki was not the only underage girl with whom Cespedes had an inappropriate relationship: 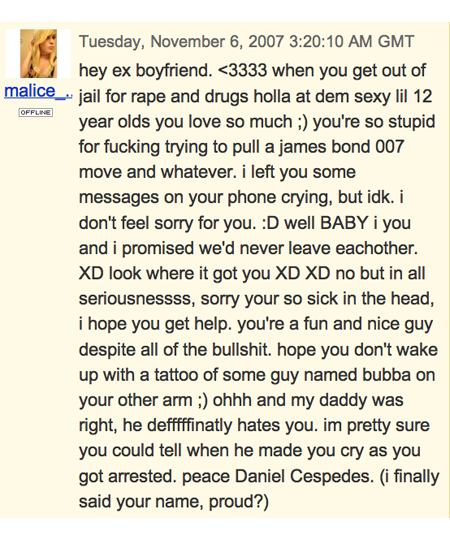 Some anonymous sources close to the situation claim that it was in fact Malice Millionaire, not Kiki, who worked with the police. Still others suggest neither Kiki nor Malice were involved; instead it was some unknown girl who was 12 years old when Cespedes had consensual or perhaps non-consexual sex with her. And yet another theory is that a group of Cespedes’ underage ex-girlfriends had collaborated to put him behind bars, in order to put an end to his predatory pattern.
StickyDrama was prepared to call it a day and post the above information without complete resolution to the mystery of who was involved in the death of Mr. Myspace. Until the other day, when we were sent a bombshell which sheds light on who worked with police, and their motivations for doing so. Although this new evidence leaves little doubt as to who was behind the Myspace Murder Mystery (perhaps “Suicide Mystery” would be more accurate, but it doesn’t rhyme very well, does it?) we are withholding it in hopes that new sources will come forward and provide more information. Drama this dark is likely to have many sordid subplots, and learning as many of them as possible will help StickyDrama paint a richer, more accurate picture for our readers.
http://www.stickam.com/mrmyspace
http://www.stickam.com/malice_millionaire
http://www.stickam.com/kikikannibal