Mainstream celebrity tabloid TMZ yesterday reported Danny Noriega’s extremely pissed off rant, provoked by American Idol’s decision not to invite the popular Entertainer back for its finale. But why would TMZ remove any indication that Danny had actually made his “important announcement” on our beloved Stickam? 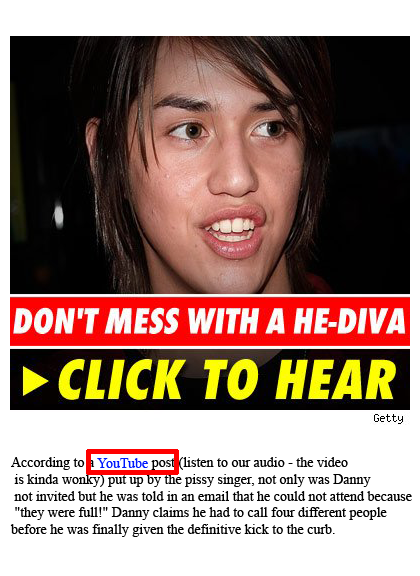 Interesting to note that it would have been simpler for TMZ to embed the YouTube video into their post, as StickyDrama has done herebelow:

Instead the tabloid chose to remove the video portion of the recording and force readers to download an MP3 file of Danny’s audio only. The result: Any evidence that recording was made on Stickam is conveniently erased. Moreover, only YouTube is cited as the source.
Why is Stickam the much-abused stepchild of mainstream journalism? FOX, the New York Times, and now Time Warner (which ultimately owns TMZ) have all taken shots at our little online community, ignoring its entertainment and overplaying its scandals. Danny made his announcement on Stickam—why not just say so?
http://www.stickam.com/dannynoriega