The most recent post on Israeli-based BlogTV blog explains the new opening of BlogTV Junior! Anyone who has been using or following BlogTV knows that they have been fighting the war on young webcamers for some time now — allowing only 16+ to broadcast. They have taken their tactics straight from G.W. Bush’s War on Terror and have had to flail away aimlessly in every direction with their mod rods doin the ole’ ban ban ban!

The pervert fighter, community manager and BlogTV figure-head Kara Hannah, started her war on young cammers and decided to use her machete where a scalpel was appropriate. Yes, the same Kara Hannah who enjoys sitting on cam and talking about tits, cock and ass:

Kara changed the policy so that no one under the age of 16 was allowed to broadcast – The utter failure of this policy has been documented over and over……and over ad infinitum. They tell young people they cannot broadcast and then frequently elevate young broadcasters to the front page of BlogTV for hours.

The dissent against this new policy has come from both sides – Adults and young. People over at BlogTVdrama polled against it – and have started a petition to abandon it. Essentially the arguments against it are that this does not target the actual problem and negatively affects everyone. Some older broadcasters have lost large portions of their audience. 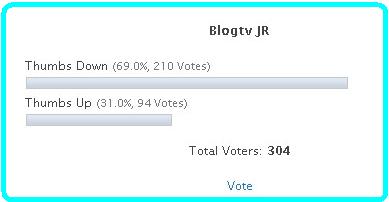 His opinion is also clear — its ‘the dumbest thing you’ve ever done.‘

Of course this has upset the many BlogTV perverts and lurkers. Even Stickam’s own hazing committee which we know as ROUTER when contacted for comment clearly stated this was ‘not a good idea’. On the up-side we have heard that many BlogTV perverts are rejoicing as this now allows them to infiltrate and quarantine themselves with the young users. Now with the new policies the regular folks who would rudely interfere and report their improper contact are no longer able to even see the profiles of the targets.

It is not likely we will see the same type of drastic moves by LA-based Stickam or San Francisco-based Justin.tv. Justin.tv allows users as young as 13 and Stickam allows as young as 14. They already have more privacy and safety features in place which young users can utilize if they so choose which restrict entry to rooms or contact with individuals. On Stickam and Justin.tv the young can still view other lives and have their lives viewed while broadcasting safely – as is the point of going live…to be seen. Plus as Stickam well knows — more viewer’s eyes equals more flagging if indeed something offensive does happen (Unless its in Stickydrama chatroom where flagging is strictly prohibited).

We would like to commend and thank BlogTV for yet another dumbass move. Keep up the great work! Btw… whats up with JustinTV’s HUGE worldwide audience?!