In the constellation of Stickam’s celebrities, there are the everyday stars who shine steadily, with whom we have long been familiar. And then there are those who flare up suddenly like a supernova, stunning the network in fear and awe of their brilliance. Such is the case with Carb0n and his accomplice Rancid, who have been owning the bejesus out of several popular chatrooms and (to StickyDrama’s delight) the spammer-rapist-buttpirate John Hock.

Beginning early this morning and continuing throughout the day—even as this post was being written and uploaded—Carb0n and Rancid seized control of Hock’s Live session God only knows how many times, replacing the video stream with Hock’s mugshot and slurpy cocksucking noises until Admins de-activated the account. StickyDrama was sent several screen-recordings, and managed to make one of our own as well.
Carb0n contacted StickyDrama this past weekend, introducing himself as a 21-year old-programmer somewhere in America. (As for the most pertinent detail of all, no word yet on the cocksize. Sorry, cocksuckers.) He went on to address a few inaccuracies in our first post about the ownage of Hock’s LIve. The most significant correction was that Hock’s Live was in fact usurped by Rancid, an online friend of Carb0n who streamed a vague credit during his stunt. (Carb0n himself prefers to attack only chatrooms, not Lives.) 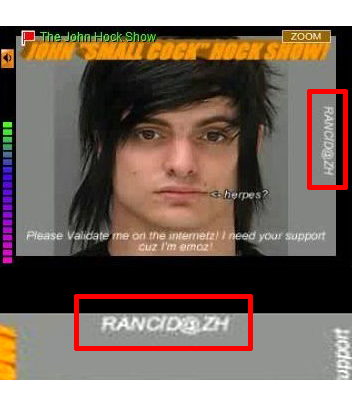 Carb0n further explained that he initally wrote a program which, in his words, “emulates Stickam’s web application.” The program injects HTML commands (not java, as had been frequently mentioned by various persons) containing Flash content into a session, allowing Carb0n to control the chat—namely adding text and videos where they would not ordinarily appear. On MSN he explained the basics:

He denied merely having purchased a software that anyone could use to perform similar hacks, insisting he had written the program himself. 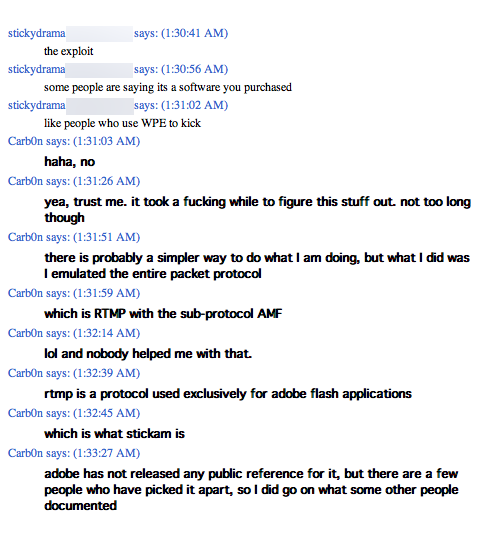 Unfortunately for Carb0n, and the users who rather enjoyed his lulzy assaults, Stickam recently managed to determine and resolve that vulnerability. However, Rancid took Carb0n’s program and made some further tweaks, whereby he is able to wrest control of a Live stream. As of this post, that vulnerability remains in both Lives and chatrooms.
As long as Carb0n and Rancid continue to demonstrate such sagacity in their choice of targets, StickyDrama hopes that Stickam won’t close this vulnerability anytime soon. In recognition of their skills and lulz, we have awarded them our top banner for as long as the attacks continue. Details of how you can win our top banner are provided here.