Since the release of his raunchy cybersex video, spamgod Matthew Lush has been keeping a low profile. Audrey Kitching, not so. 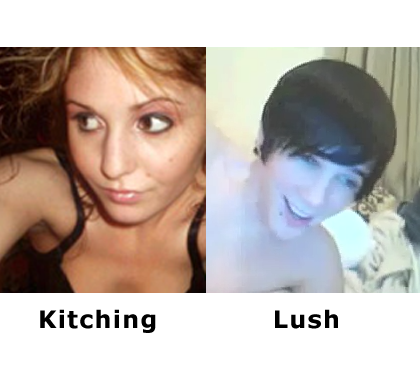 The pink bombshell went Live today with Roxy and the lovable suckable Adam Paranoia. Most of what came out of her mouth was the usual pointless banter … however the drama-meter hit a huge spike when she called Lush a “pedophile.”
While the statement was obviously made in jest, StickyDrama is curious as to the reason behind this intense dislike the two e-famous but really worthless Entertainers have for each other. Apparently the source of the bad blood would be Roxy’s co-hosting with Audrey—Lush is bitter that his former co-host is now on another show, and is attacking Audrey out of spite.
But did Lush call Audrey a square-pussied pink whore? Did she call him a lying hypocritical cocksucker? These are the morsels that make our mouth water; these are the details we want to know.
http://www.stickam.com/lyinghypocriticalcocksucker
http://www.stickam.com/squarepussiedpinkwhore

One Night in Joshua Paul

Not That Faggot, THIS Faggot