You know, dear readers, StickyDrama has been calling Matthew Lush a two-faced stereotype for about 3 years now. But lately we’ve grown flat-out disgusted by his dancing-4-dollars gimmick. 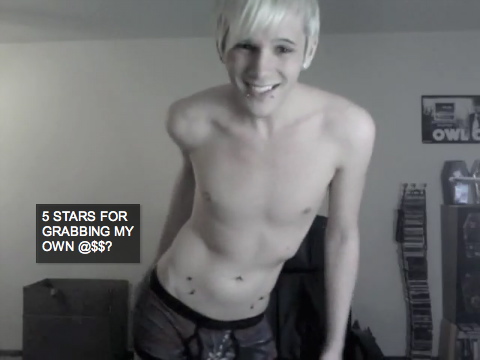 The 20-something-year-old spamgod isn’t a spring chicken anymore. His fake marshmallow-soaked-in-honey smile isn’t able to sell as many crappy t-shirts as it did in his teens.  At least, that’s our best guess, since he recently bitched on both YouTube and Twitter (hey, why not Plurk, Matthew?) that there were only 4 dollars in his bank account.

Cry us a fucking river. A broke e-celebrity … a tragedy … such a tragedy.  And as if a broke e-celeb wasn’t rare enough, there is disturbing evidence that Lush might be a big flaming phony as well.  What are the odds of that!  Anyway Hislatestvictim, whoever the fuck she is, wrote as much on a recent formspring response:

It is unclear how Stacey here knows Lush, but her opinion of his character coincides perfectly with our own.  He’s the stereotypical faggot who gives normal cocksuckers a bad name.  PUT SOME FUCKING CLOTHES ON.
http://www.youtube.com/user/gaygod

@ConnorJon Tells All: @MatthewLush "is a Loser, Abuser and a User. He's a Fake Ass Bitch"