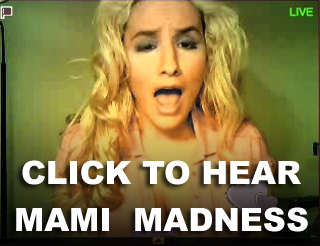 Our readers will be treated to Mami’s 30-minute fight with her husband Von, who lately has noticed that his wife is acting “weird” and “irrational at times,” and he is “scared” that she might “get stuck that way,” which is to say bonkers. Mami, slurring her speech and sounding as coherent as Anna Nicole Smith on a kilo of coke, actually agrees and offers to check herself in to a mental hospital.
Crazy as she sounds, she’s concerned for very rational reasons: Her husband has told her he needs to “travel” (we would too in his shoes) and hasn’t forked over any of the insurance money from the housefire Mami started; Mami wants what she considers her fair share. Specifically, she wants $100,000 upfront in case her husband finds “some hot brunette from Puerto Rico” or even a “stripper” and leaves Mami penniless … as he did to his previous wife whom he dumped for Mami.
These two were just made for each other!
http://www.stickam.com/hotmamitv

Get This Bitch On Stickam

Alert the Governor of Florida