Despite all its resources financed by DTI, Stickam was unable to webcast the heavily promoted Live Finale of its SXSW Casting Call Friday night. 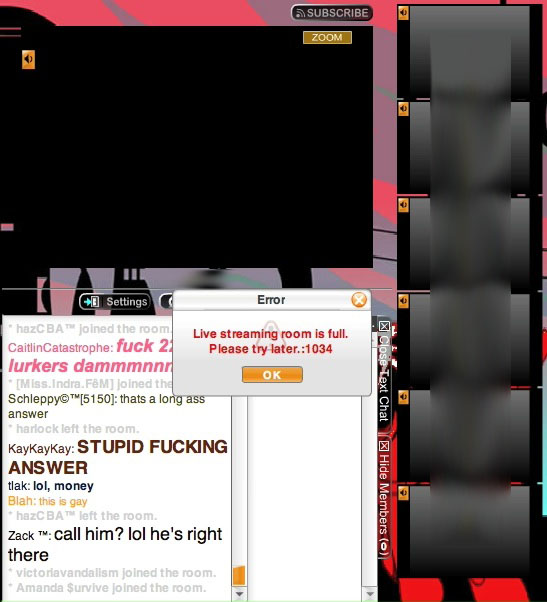 The finale was supposed to begin at 5pm PST in Streaming the Cube; however STC’s Live couldn’t handle the hundreds of users who had come to watch the event, and the room crashed many times. After about half an hour of on-and-off starts, the room more or less stabilized and the finale proceeded, although the entire event was beset with heavy lag. The chat was nothing but a constant stream of spam for viewers’ preferred finalists, with Audiowh0regam appearing to have the most supporters. Three Stickam Admins (who were next to StickyDrama during the show) ineffectively threatened to ban spammers; even if they made good on their threats, for every one spammer banned, three more seemed to take their place.
Besides chuckling at the extreme difficulty Stickam was experiencing, StickyDrama was more than slightly amused that the Rapist was apparently DDOSed; his internet connection inexplicably dropped several times, and it was almost impossible for him to even speak. Also not to be overlooked was Mikeyy, who was able to snatch a camspot as an undefined user.
Judging by the spam in the finale, and by StickyDrama’s own poll, Audiowh0regasm will emerge the winner. Nevertheless we eagerly await with the rest of Stickam for the results of the voting.
http://www.stickam.com/profile/streamingthecube
http://www.stickam.com/profile/audiogasm

Go Ahead And Rape the Bitch, John