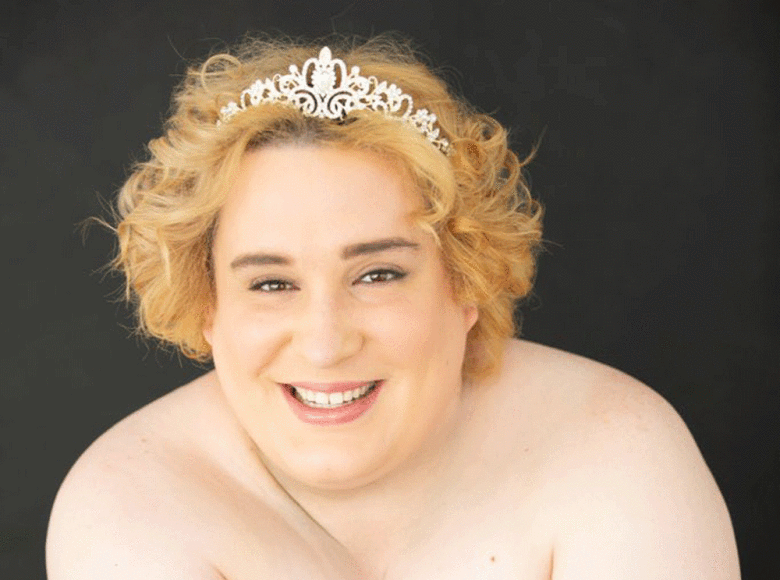 Even the Canadians agree: Ain’t nobody crazier than trannies. And Jessica Yaniv is a tranny to the core. 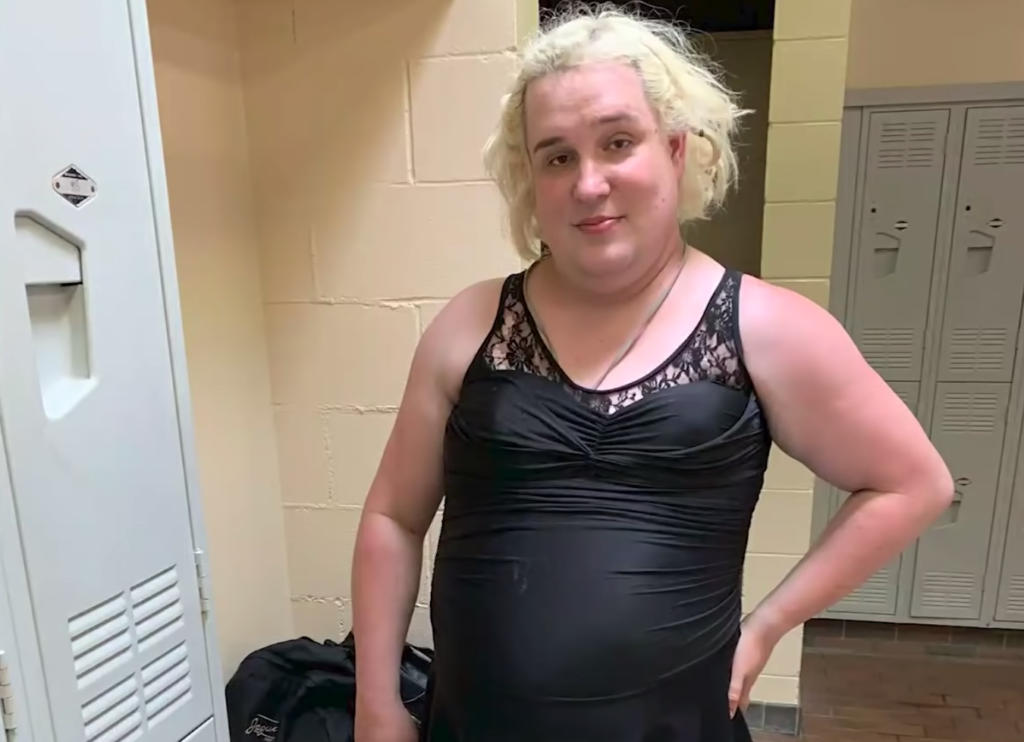 Yaniv made international headlines when he tried to force a female aesthetician to wax his balls. The situation was truly an Oppression Olympics, because Yaniv was crying sex discrimination whereas the aesthetician was an immigrant with little financial resources and poor English skills. StickyDrama has to give credit were it’s due, Yaniv clearly knew how to game the system by playing the victim card, with 16 human rights complaints filed with the British Columbia Human Rights Tribunal alleging that the the aestheticians’ refusal to wax a tranny’s balls constituted discrimination.

At first, the Tribunal treated Yaniv’s complaint seriously, with one member writing: “Waxing can be critical gender-affirming care for transgender women[.]” They are Canadian, after all. But it didn’t take long before they found Yaniv’s conduct troubling. Canada’s National Post reported:

The tribunal member hearing the cases has scolded Yaniv, saying her behaviour in pursuing case after case, even after the Tribunal cautioned against wasteful “unnecessary duplication,” has not been “conducive to having the issue resolved on its merits,” and “opens a valid question about her motives in filing so many complaints.”

The Tribunal member also called “improper” Yaniv’s tactic of withdrawing complaints against some of her targets who obtained free legal representation and made clear they intended to defend themselves at a hearing, rather than go through the tribunal’s settlement process…

She also has such a focus on the Asian background of the salon workers in question that the tribunal has cautioned her for fixating on racial stereotypes about South Asian Canadians and making “derogatory assumptions” about the “culture” of Honveer Randhawa, legal counsel to one of the salons.

Meanwhile, back to the present: Multiple sources are reporting that Yaniv was suspended for the ostensibly harmless act of tweeting a photograph of a check. But in light of her litigious past, Yaniv’s suspension could be viewed as punishment for a violation of Twitter’s terms  of service, specifically its rule against harassment. The check, you see, is apparently the fine that the Tribunal ultimately awarded to the immigrant defendant in the complaint Yaniv had lodged in 2018. Yaniv’s Twitter itself indicates that it has only been suspended, not fully banned from the platform. Really, no biggie. Frankly, payment to a public entity should be a public record that should not be wrong to publicly share, regardless of however it impacts people’s feelings.

In point of fact, StickyDrama’s Twitter has also been suspended for about a week or so, punishment for the TOS “violation” of tweeting a police report obtained pursuant to a public record request. That’s right, the police provided one of their own reports to StickyDrama in exchange for a small fee that we paid in compliance with state law, and they even redacted information that was required to be hidden in their judgment, and still Twitter suspended us for tweeting it. No, it wasn’t that bitch Carole fucking Baskin who reported us; it was that bitch Kiki fucking Kannibal. 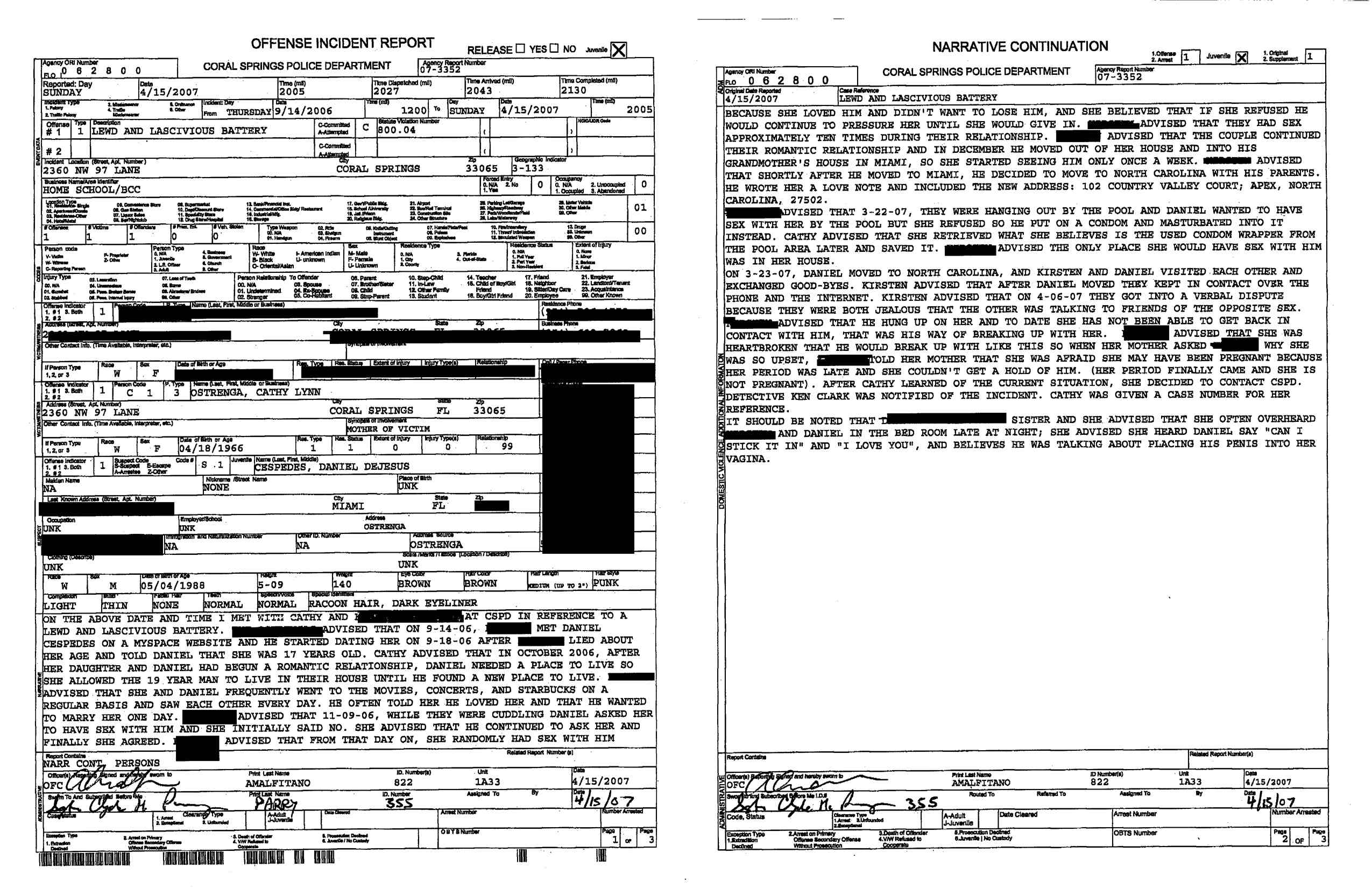 So there’s that, just so nobody could accuse StickyDrama of throwing stones from our glass house. Aside from the whole “wax my balls or I’ll sue” meme that flooded our Facebook feeds a few months ago, Yaniv is mostly a Canadian curiosity who rarely makes U.S. headlines. If the reader is so inclined, a simple Google search of Jessica Yaniv and Jonathan Yaniv (they yield different results) will reveal all sorts of sordid stories; unfortunately, some of the juiciest allegations come from questionable sources. We won’t mention them all, even though pretty much all the motherfuckers have a shitload more traffic than we do.

But of all the sources, only the National Post strikes StickyDrama as remotely credible and worth the read for exploring the “new legal perils and moral quandaries” of the situation. Their writer also deserves a Pulitzer for this poetic description of the most circulated photograph of Yaniv: 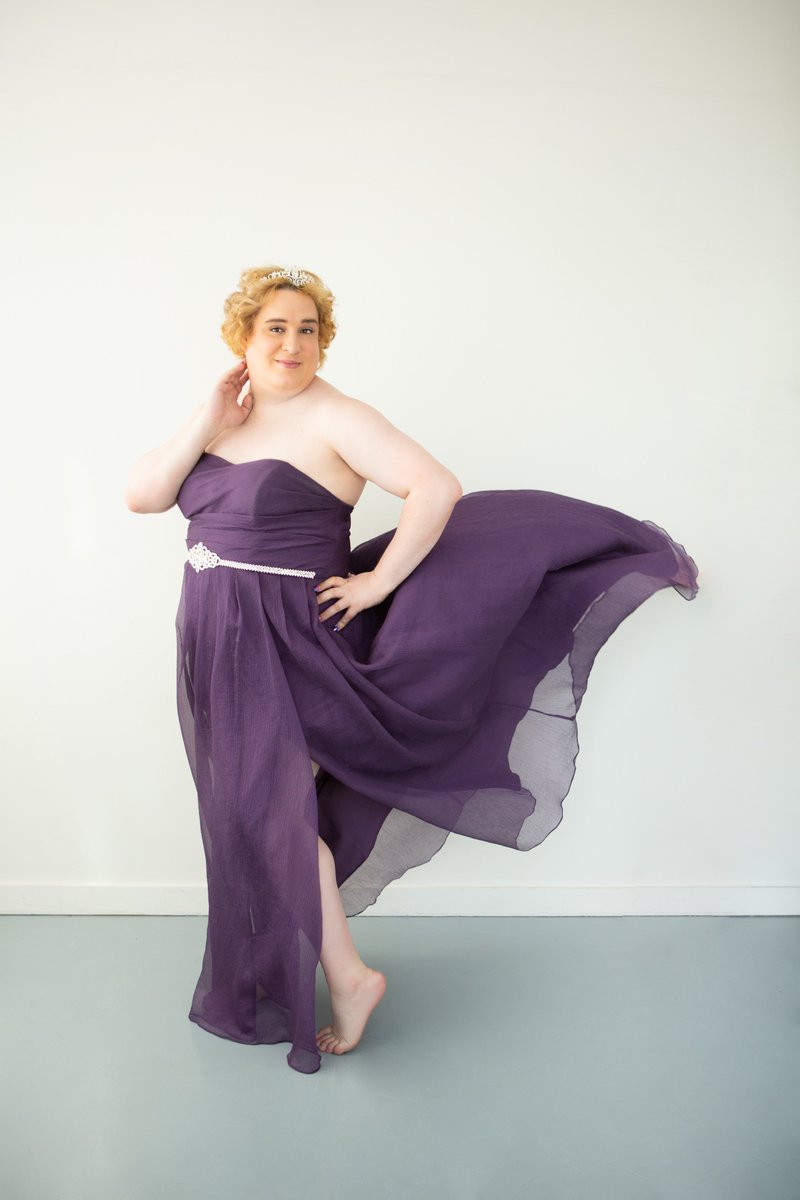 “Here was a caricatured image of an apparent trans bogeyman, in a dress reminiscent of the one worn by Ursula the Sea Witch, allegedly talking about pestering little girls in bathrooms for pleasure.”

Interesting to note that the very least credible of them all, Life Site News, reported that “Langley RCMP [Royal Canadian Mounted Police] charged Yaniv in December with two counts of possessing an illegal weapon in connection with an August 5 incident in which Yaniv was seen brandishing and appeared to fire off a Taser during a heated livestreamed debate with American conservative transgender “woman” and activist Blair White.” This tidbit might explain the alt-right darling’s jubilation yesterday over Yaniv’s supsension: 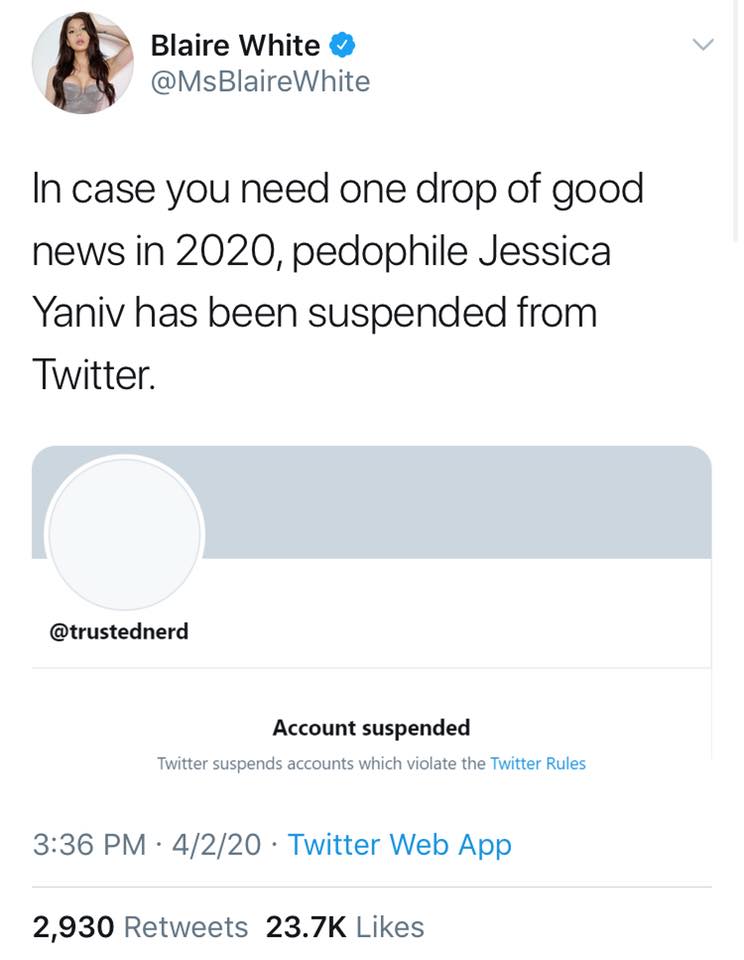 And about that “pedophile” remark, quite a few sources, including the National Post, allege that Yaniv has an unwholesome fascination with young girls, which, if true, would make Yaniv not unlike 90% of all heterosexual men. However, it’s worth noting that the National Post cautiously characterizes the claims and allegations concerning young girls as just that, “claims” and “allegations.” Other sources post lurid screenshots that are probably true but could have easily been Photoshopped too.

By the way, if you look hard enough, you might a screencap or 2, or 437, where StickyDrama is saying very naughty things to young boys. Just saying, Mr. Hansen, all those screencaps were Photoshopped too, and all the boys were definitely over the age of 18. Anyway, while it’s impossible to really get inside Yaniv’s mind and know for certain whether the tranny thing is all an act, he presented as male uniformly across social media until recently: 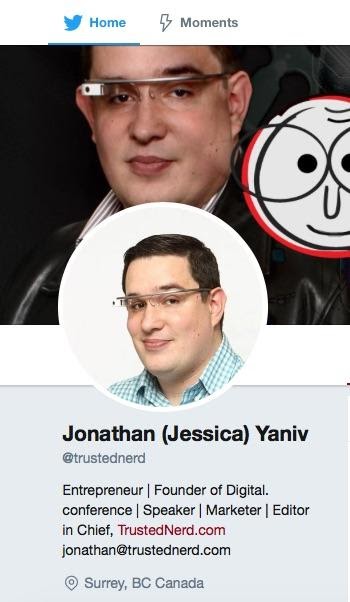 Furthermore, one doesn’t have to have a Ph.D. in International Diplomacy to know that certain cultures, specifically the goat-fucking forehead-tapping-the-carpet-5-times-a-day ones, are just not very friendly to nontraditional sexual orientations and gender identities. Therefore, it is unfair to immediately dismiss as racism Yaniv’s observation: “I hate to put race into it, but it seems there is a lot of negativity and lot of pushback toward LGBTQ from the East Indian culture[.]” 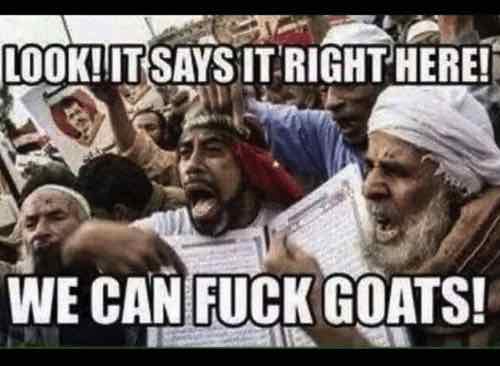 StickyDrama did not ask Yaniv for comment since @trustednerd is still suspended as of the time of our post and we are unaware of any other verified means of contacting this colorful personality. (A Google search for Yaniv indicates several profiles that look shady, including ones associated with Jonathan Yaniv.) StickyDrama is also really just commenting on the National Post’s reporting, which Yaniv did answer regarding all but the recent Twitter suspension.