Yesterday on a whim, StickyDrama opened both Audiowh0regasm’s Live, as well as the SXSW 08 profile’s.
And we GASPED at what we saw: 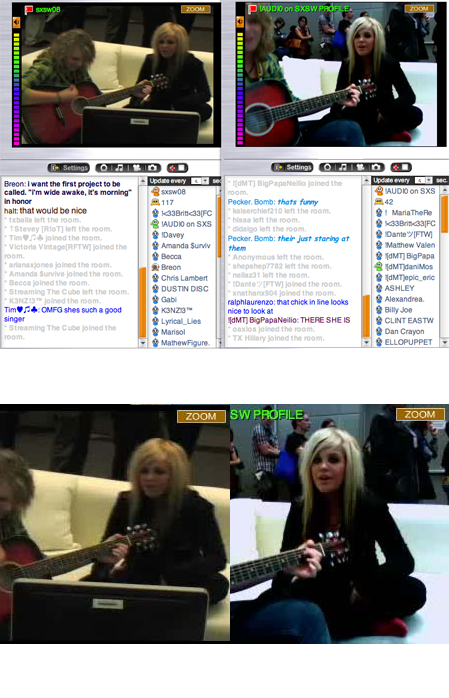 This side-by-side comparison is a testimony to the principles of cinematography; and whatever one’s opinion of Audio’s skills as a correspondent, it cannot be denied that she is the Stephen fucking Spielberg of camera angles.
Putting aside this fascinating miracle of physics, StickyDrama would very much like to know who the fuck is supposed to be doing the job. So far Adam Paranoia has conducted all the interviews while Audio is off singing Kumbaya with whats-her-face.
And while we’re bringing up Adam, did anyone else notice his venom-tipped barb:
StickyDrama wasn’t viewing Live as Adam took a big smelly crap all over Audio’s self-esteem; we were both thrilled and stunned to find Adam’s swipe saved under the SXSW 08 profile’s videos. We also found it telling that Adam said he was “just kidding” after teasing members of a nearby guitar booth, but no JK followed his crack at Audio.
http://www.stickam.com/audiogasm
http://www.stickam.com/adamparanoia