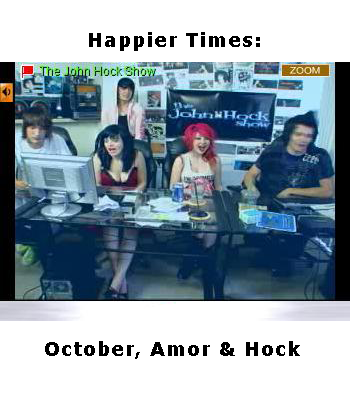 For StickyDrama, the most tiresome thing on earth is reporting the immature antics of John Hock. Truth be told, nothing would make us happier than seeing the statutory rapist run over by a Weinermobile, or murdered in a meth-induced rage by whatever sugardaddy is sponsoring The John Hock Show. Then we would no longer be obliged to watch his stupidity.
But alas, he remains alive and the stupidity doesn’t end. Today Hock announced, again, that he is single. (He also danced around with a turban made of bubble wrap, and while doing so tripped and hit himself on the head.) Here are a few selected highlights:

StickyDrama readers will recall that Hock and Amor Hilton have broken up before, but reconciled. This breakup, however, seems to be of a more permanent nature: Hock describes how Amor and his roommates teamed up against him, demanded that he move out and punched him in the face. Please Amor, tell us someone was videotaping!
Confirming what a pathetic nobody he is, Hock repeatedly posted news of the breakup in Myspace bulletins, each containing about a dozen Stickam players—his impressive 700 lurkers is probably closer to 50 actual persons. We screen-recorded one of his several bulletins; all the players froze our browser, but we managed to record enough to prove beyond a doubt that Hock has again resorted to this old cheat.
We recommend viewing the YouTube video fullscreen and at high quality, to clearly read Hock’s bulletin; however anyone familiar with Myspace bulletins packed full of Stickam players will instantly recognize what’s going on. Download the 40 MB full-resolution recording here.
Using one of our alias AIM screen names, StickyDrama notified Stickam Admins of Hock’s player-packed bulletins. (We have partially blurred out the screen names, lest they be bombarded with pointless IMs.) Now that Stickam is aware of what Hock is doing, will they continue to feature him, and thereby condone his cheating? Will they allow all Entertainers to use similar methods to gain more lurkers? How low you must be, AVC employees, when a lecher like StickyDrama lectures you on fairness and ethics! 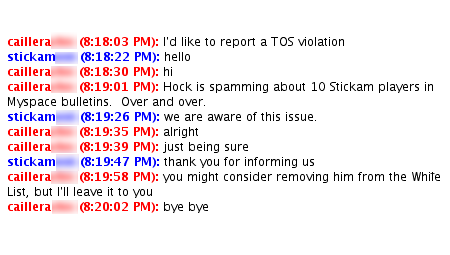 Anyway enough pontificating, back to the breakup: What was the proverbial straw that broke the camel’s back? Information is still trickling in, but rumor has it that Amor is no longer in the mood to have sex since her miscarriage a while back: Although Hock’s p33n is on the small side, he fucks “like a jackhammer” and the sensation is unpleasant. So Amor had acquiesced in Hock’s pounding a replacement vag until hers fully recuperated. The dubious honor fell on October Hallow, a fan with whom Amor herself had been flirting for several weeks. Hock and October had icky breeder-secks; Amor and Octobers engaged in less objectionable clit-sucking.
October confirmed with StickyDrama that she had a 3way with Hock and Amor. While the tryst does not seem, by itself, to have caused the breakup, surely it could not have brought any stability to the at-best rocky relationship. Amor has not yet contacted StickyDrama with her own version of the salacious details—although we certainly hope she will.
http://www.stickam.com/johnathonhock
http://www.stickam.com/amornicholaihilton
http://www.stickam.com/octoberhallow