Brandy Suicide, whom no one could accuse of having too many friends, last night had an online catfight with none other than the Queen of Mean, the Quick-to-Kick, and the Most Hated user on Stickam as voted by StickyDrama readers, Kiki Kannibal.

The drama exploded when Brandy called Kiki’s cellphone as she was the host of Kayvon Zand’s LIve, in contravention to Stickam TOS but apparently with Kayvon’s approval. As the two young ladies exchanged pleasantries, Brandy’s aesthetically challenged gal pals KATIESTAR and ScarahTerror! passed around Kiki’s cellphone number via PMs to several people.
Kiki was soon hit by a barrage of calls, during all of which her call waiting signal beeped incessantly. It did not take long for drama instigators to tell Kiki that her new number had been leaked by Brandy. Kiki’s reaction was swift and furious: “I’m gonna report that fat bitch to Andy … and I’ll get her banned.” Brandy shook off the threat, adding in a cavalier tone that she has already been banned 7 times. 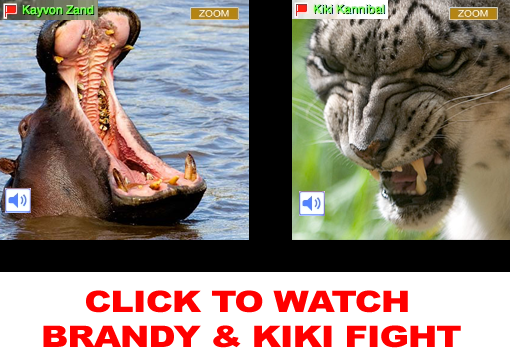