“War,” wrote New York Times journalist Chris Hedges, ” is a force that gives us meaning.”  And how right he is.  To a large extent, StickyDrama is defined by those whom we oppose.  Where would we be without the rapist? The crazy bitch? The hypocritical no-talent cocksucker?
And now, that fucking midget.
StickyDrama was highly distressed to learn that Eric the Actor occupies the #1 All Time ranking as determined by the esoteric StreamRank algorithm. 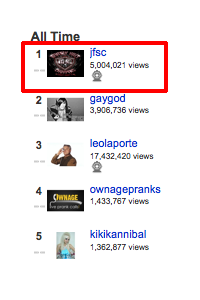 Let’s be frank.  We don’t have anything against midgets (or persons with Ehlers-Danlos syndrome, the disorder afflicting Eric).  But Stickam is about live entertainment; it is not entertaining to watch a mute lump of flesh play video games; and any algorithm which awards top ranking to an abortion like Eric the Actor is clearly flawed.
“But,” cry defenders of the midget, “he’s on Howard Stern!”  Yes yes yes, StickyDrama is aware of Eric’s role on the show—as cannon fodder for Stern’s cripple jokes.  He is in no way a significant guest and is never taken seriously as entertainer in the mainstream media.
Stickam ought to be a place where young Entertainers with talent and energy can gather an audience, hone their skills and hopefully one day make buck or two.  (That, and a place to see tits and cocks, but why bring that up?)  Since the company seems to be focusing more of its efforts—and money—on luring mainstream celebrities who signed a licensing agreement without ever even logging onto Stickam for themselves, it is our duty to exert external pressure to mold the network into what it should be.  Namely by banning the midget’s account.
To this end we will award our top banner to whoever does the dirty work.  Like our contest to keep John Hock off the air, there are a few strings attached.  Just hacking and temporarily taking control of the account isn’t good enough—an outright ban is required to remove Eric from the rankings.  Give us advance notice, don’t ban first and then contact us afterwards.  Most importantly, the account needs to remain banned, without any chance of being restored by Stickam.
Once the midget has been dispatched of, Leo’s next.
http://www.stickam.com/jfsc