StickyDrama was perusing through comments on our older posts, when one particular comment in our Xanax story jumped out at us: 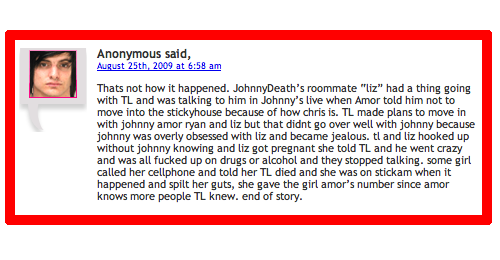 Our readers will recall that TL, whose legal name was Terrance Elmassian, died in a multiple-fatality car accident in early August 2009.

TL is known to have visited Los Angeles and stayed briefly at Johnny Death’s several weeks prior to his death—the same time during which Liz Stefani was also staying there.  Eden Shizzle provided StickyDrama a cellphone photo indicating that TL stayed at Johnny’s for “a few days” in late June 2009; he took the photo with Liz while TL was staying there. 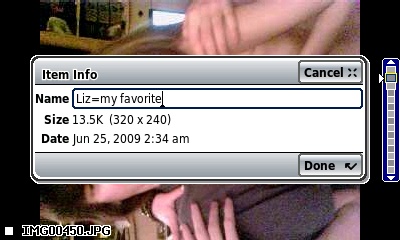 StickyDrama contacted Liz using the same email she herself used to register and write her own MyDrama post detailing her stay at Johnny Death’s. Asked whether she had sex with TL, whether she became pregnant, and whether she was still pregnant, her short reply was:

“I have nothing to say in regards to this. It’s nobodys business really.”

But one could argue that every StickyDrama post is “nobody’s business” to its subjects; Johnny Death probably felt that the same over Liz’s own post about him.   Regardless, let us consider the fact that Liz did not deny that had sex with TL, nor that she became pregnant, nor that she remained pregnant; let us further consider that the 21-year-old single mother from San Antonio, Texas presently has 3 children already.  StickyDrama speculates, but at this time will not assert as fact, that LIz had sex with TL and became pregnant.  We further speculate that she did not miscarry or terminate the pregnancy; Texas is among the top 5 “pro-life” states based on abortion laws, and LIz already carried three previous children to term.  But again, all this is pure speculation.

Recent photos Liz uploaded to her Myspace show her as rather thin for 3 or 4 months pregnant.  However, there have been many cases of young mothers who managed to hide their entire pregnancies from their families by dieting or tight clothing. 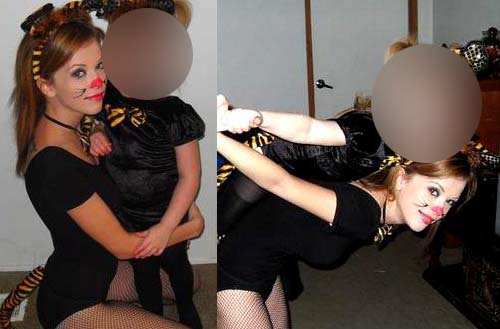 If Liz is indeed pregnant by TL and carries his child to term, the Elmassian family could in theory sue for visitation rights—or full custody, if they can demonstrate that Liz (who is a single mother of three children and whose only known occupation is an exotic dancer) is unfit to be a mother.  Furthermore, Liz might be eligible for welfare from the State of Texas, since her child would be born to a deceased father.

Nikolette, who is widely regarded as TL’s most serious girlfriend, doubts that TL fathered any children because she and he “had sex 100’s of times, we probably used condoms less than one month out of the year of our relationship,” yet she did not become pregnant by him.  But if Liz is carrying TL’s child, Nikolette said, ” I mean no disrespect towards her, I do not know her, but I care about Terrance and his death is tearing me apart. It’s a very important matter, to me, and his family, if she is really pregnant by him, then it needs to be brought to attention immediately and not avoided. Because if I [were] carrying a child of a dead loved one, I wouldn’t hide it.”