Inside Edition delved into the slimy depths of internet drama this week, when it broadcasted an interview with Trainreq, the teenage hacker who rocketed into e-fame by leaking naughty pics of Miley Cyrus.   Trainreq must have popped a few Valium, because he seemed rather calm and collected—not the insecure blob of emotional jelly whom his peers love to hate.

Those familiar with Trainreq would think that all the media attention would be the apotheosis of his quest for j33tness; but in fact he feels unfairly portrayed in the segment, as he explains in his own blog.
No one doubts his abilities.  But if push came to shove, a pre-schooler who had strawberry poptarts and chocolate milk for breakfast would be more menacing than our Trainreq.  Despite his impressive skills, his fragile ego has made him Lolcow Supreme of hacker forums such as Digital Gangster (where Audiowh0regasm now hangs out using the sobriquet Barbie to fuel the wet dreams of script kiddies) and even inspired a blog entirely devoted to you-know-who.
His most glaring fault is a constant need for recognition, to prove himself as a j33t hacker:
“I am going to thoroughly document every breach of the law I commit on digitalgangster.com forums so that when I go to trial there is absolutely no lack of evidence for the prosecution, thus ensuring my e-fame and maximum sentence.”


No one has accused him of being overly gifted in the looks department, either. 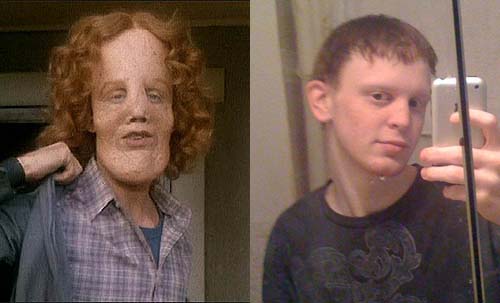 And he is known to break down in hysterical fits.

Hopefully for Trainreq, his 2-minute-long moment of fame on primetime TV will be the happy place to which his mind retreats while a gigantic black cocks tears asunder his intestines in prison.  Not only did he eagerly confess to computer intrusion and spamming before an FBI agent Victor Rodriguez, but he’s betting his entire defense on his tearful grandmother:
“Yea, but i was raised by my grandparents, my grandma will go into court and do her whole grandma thing and get me off easy.”