When Stickam absolutely, positively has to scare the living piss out of teenagers, they call Gary.
Gary Berzner of the E-Commerce Law Group is Stickam’s general counsel—their lawyer, to put it simply.  It was Gary who sent Mikeyy and Too Live “Cease & Desist” letters, back when the pair was terrorizing users and hacking profiles left and right.
Mr. Berzner issued yet another one of his polite threats, this time to  Psychotic Router. At issue is Stickamsluts.com, a domain Router (as we affectionately call him) bought fair and square.  Gary demanded that Router take down the site and surrender the domain to Stickam.

For those of you unfamiliar with Router, let it suffice to say that he single-handedly compensates for all the wannabe-hacker scriptkiddie wiggers who harass girls on Stickam.  Balancing the scales in the name of sodomy , Router passes his time merrily extorting n00dz out of boys.  Since some readers have a tendency to make quick judgements, they are apt to forget his good side.  We should try to remember that he never extorted n00dz from boys younger than 12 years old, except once, and he deleted that file eventually.  (Stickam has been less understanding, and bans his profiles almost as soon as he makes them.)
Router also has a wonderful sense of humor:  After receiving Gary’s little letter, he redirected Stickamsluts.com—which heretofore was nothing but an image of Kiki Kannibal and an “under construction” sign—to Exshot.com. 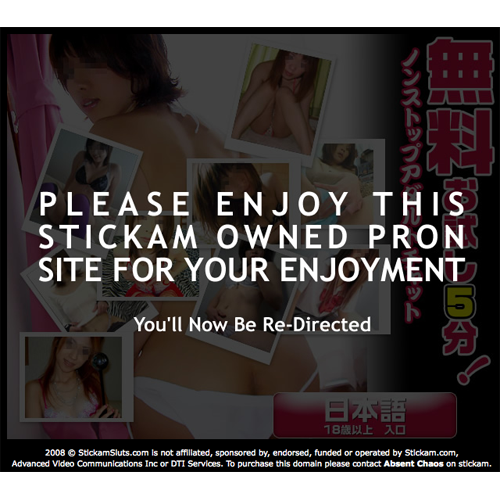 Exshot.com is one of the many Adult sites owned by DTI Services. DTI is technically a separate company from AVC, which owns the Stickam trademark; however both DTI and AVC are rumored to be owned by the same Japanese billionaire.
Are the rumors true?  Does an extremely wealthy pornographer own Stickam?  The question has been explored at great length by certain writers, and StickyDrama won’t cite their exhaustive investigations here—today, anyway.  But a simple Business Search on the California Department of State’s website does yield some interesting information.  Both AVC and DTI share the same “Agent for Service of Process,” Charles Dupree. 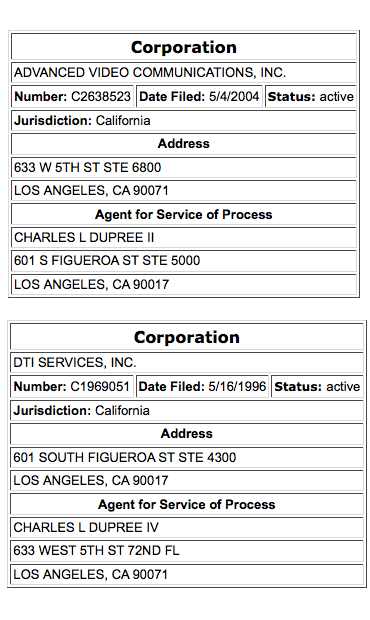 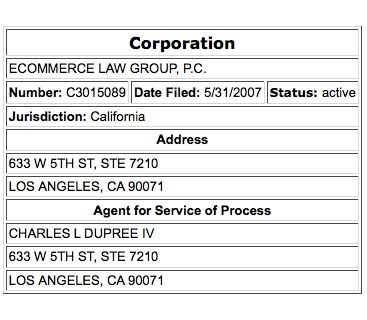 Whatever legal smoke and mirrors separate AVC from DTI, Router’s redirect might prove as tactically brilliant as it is insolent.  Now the Stickamsluts.com domain name no longer leads users to any product or service offered by Router and which could be confused for Stickam.   While it’s not immediately clear whether AVC has any grounds to sue Router for sending non-harmful traffic to DTI, the very idea sounds pretty silly; you might as well sue someone for giving you money.
Well Gary … now what?