StckyDrama was among the thousands of viewers enthralled by Stevie Ryan’s impersonation of spamgod cocksucker Matthew Lush last night. 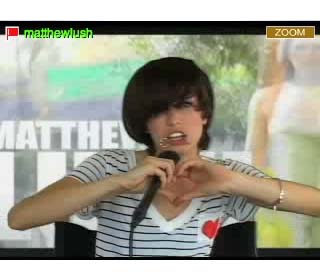 We were in our chatroom, cajoling studling CHRIS*[topher] into once again showing his impeccable naughties, when an uproar on the Front Page sent reverberations across the entire network. Stevie, on a fake Lush account, was Featured and hosting her show at Stickam’s studio! Now, for the company to permit an hour-long Featured mockery of a major Entertainer is one thing: Their own Terms of Service specifically do not allow anyone to “select or use a user name of another person with the intention of impersonating that person.” But the fact that Stevie’s show was produced at Stickam’s very office reveals the depth of contempt certain staff members have for the despicable cocksucker.
The loveable suckable Adam Paranoia was one official accomplice to the lulzy show. At StickyDrama’s request, Stevie attempted to kiss him on cam, which would have resulted in the creation of legendary “Paranoia-Lush Gay Kiss” caps; however the gentlemanly Adam declined, and she had to settle for a hug:

Just as well. Adam’s mouth, and a few other openings, belong to us anyway.
We were hitherto unfamiliar with Ms. Ryan, but instantly fell under the spell of her charisma. The hearts and yea-ya’s, so fake and irritating when done by Matthew, became fresh and amusing when offered by Stevie. It was so adorable, we’ll assume she was in character when she requested mods to ban StickyDrama.
Let’s just hope she doesn’t jerk off on cam and then hide for a few months like a worm under a rock. We enjoy her too much for that.
http://stickam.com/stevieryan