Danny Cespedes, aka Mr. Myspace, passed away nearly 7 months ago, but the Myspace Murder Mystery refuses to die. Last week the story went from tragic to macabre when Kiki Kannibal’s mother claimed to own certain images of the dead boy.
In an effort to force StickyDrama to remove images of Kiki and Cespedes from our website, Mama Kannibal filed a copyright infringement complaint with our web host, citing the Digital Millennium Copyright Act (DMCA). Under American law, the photographer owns the copyright to an image, whereas the subject of the image does not. StickyDrama must remove or disable access to Kiki’s likeness on our site for 2 weeks, at which point Mama Kannibal must file a lawsuit or drop her claim—a period known as “acquiescence.”
The temporary result of the complaint is a rather disturbing situation: A significant portion of Cespedes’s remaining online personality belongs to a person who played a role in his death. (The picture of Danny in a coffin was not taken by Mama Kannibal, and hence she has no grounds to demand we remove it.) To lighten the mood, we introduce our readers to the next big e-celeb, Piggy Kannibal: 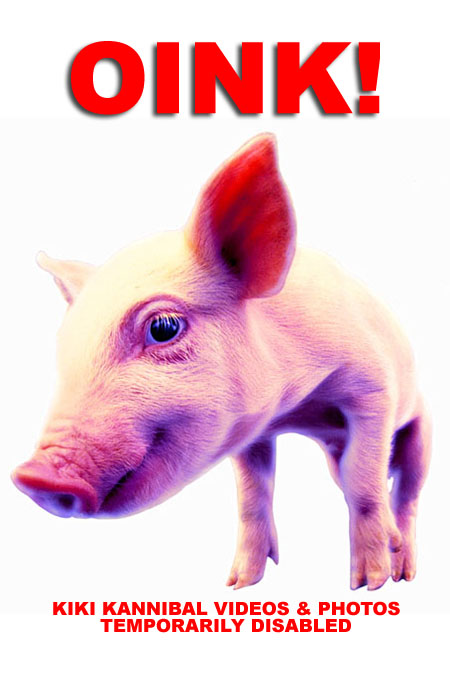 Our dispute with the Kannibals involves several First Amendment issues: copyright, privacy rights, publicity rights, and fair use. On one hand, Kiki Kannibal is a registered Florida corporation; and although there is no record of a registered Kiki Kannibal trademark in the state of Florida, in America rights usually belong to whoever first uses the trademark in commerce—such as selling shitty fake diamond necklaces. On the other hand, StickyDrama’s criticism and satire of her online behavior clearly fall under “fair use,” especially since Kiki Kannibal is a limited purpose public figure. Cespedes’s right to privacy, under the law, ended with his death.

Assuming Mama Kannibal did not perjure herself when she swore to have taken the photos of Kiki and Cespedes, new questions arise. Questions any reasonable person, in particular a child’s caregiver, should think to ask. Questions such as, if Cespedes was the predatory criminal as he is often described, how he did gain access into the Kannibal family? Why would Mama Kannibal photograph the same smiling boy she would later say raped her daughter, if she did not at least initially approve of their relationship? Shouldn’t she have realized that a 19-year-old boy ought not to date a 14-year-old girl?
In an event, should the dispute go to court, a trial would take place in StickyDrama’s jurisdiction, Manhattan (New York County). The Kannibals would face an uphill battle here, where the New York Court of Appeals ruled that even unauthorized publication of someone’s likeness is “the price every person must be prepared to pay for a society in which information and opinion flow freely.”
http://stickam.com/kikikannibal