“Jesus Christ,” whispered the Court Clerk at the Stanley Mosk Courthouse in downtown Los Angeles as she entered StickyDrama’s Small Claims filing into her computer.  “You’ve got a very interesting claim here,” she said after regaining her composure.

This Monday StickyDrama filed a lawsuit against Advanced Video Communications, LLC, the company that owns the Stickam trademark.  Also named as defendants in the lawsuit are GoDaddy.com, Inc. and John Doe, aka Router, aka Psychotic Router, aka r0uter.  The amount for which we are suing: $7.41.

Our readers can download a full-res copy of the lawsuit here. In order to reduce headaches and hatemail, certain contact info has been blurred out.  Our Small Claims case number is LAM 09M12298 and our court date is scheduled for February 8, 2010.
Of course, StickyDrama has no intention of really suing AVC or GoDaddy.  Rather, we had to name them as defendants because we chose to pursue the case in Small Claims Court, which cost only $30 to file.  A lawsuit is necessary in order to issue AVC and GoDaddy subpoenas for  their records on Router.  On the other hand a full-blown civil lawsuit, in which we sued only Router and just served AVC and GoDaddy subpoenas, would have cost upwards of $5000.  Neither Stickam nor GoDaddy can voluntarily provide us with any information on Router, thanks to the Electronic Communications Privacy Act. Once Stickam and  GoDaddy have responded to the subpoena and Router’s true identity—which we have been told by one of Router’s victims is Garrett Graff—has been established in court, StickyDrama will amend our claim to drop AVC and GoDaddy as defendants.
Where did the $7.41 figure come from?  Funny you should ask.  Apparently in retaliation for our recent post in which we published what one of his victims believes to be his legal name and address, Router attempted to “frame” StickyDrama by falsely naming us as the domain registrant for RouterHQ.com.  It turns out that Router used GoDaddy to register the domain RouterHQ.com, the same domain registrar that we used to register StickyDrama.com.  Since he controlled that domain through his GoDaddy account, he was able to change its registrant to whatever he liked in GoDaddy’s WHOIS database—and, in an attempt to make it look like StickyDrama was the owner of RouterHQ.com, he declared us to be the registrant. 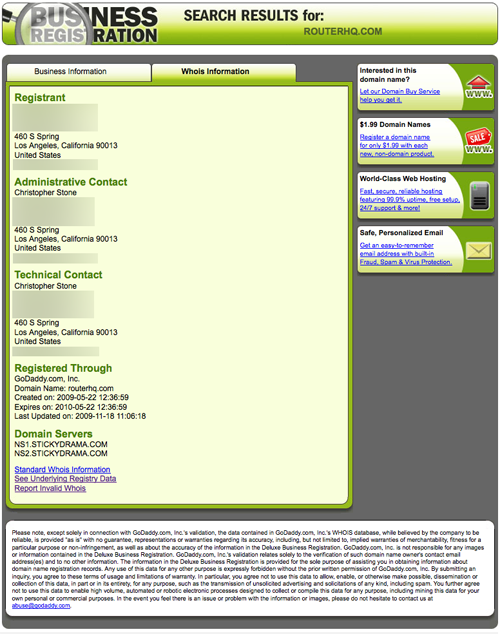 Our readers will recall that RouterHQ.com is the domain of the now-disabled WordPress blog on which Router described cyberstalking, blackmailing and enticing minors into sexually explicit webcam performances. While technically it is not illegal to describe blackmailing children into sexually explicit acts peformed via webcam, it’s not a very good idea either.  Furthermore, since Router knew that StickyDrama was in fact not the owner of RouterHQ.com, and since he intentionally declared that we were its owner in an attempt to harm our reputation, Router committed libel.
Yes, Kiki. Someone libeled StickyDrama.
But lIttle did Router know that whoever is the registrant of a domain is also that domain’s legal owner.  Once StickyDrama proved our identity to GoDaddy, as the owner of the domain we authorized GoDaddy to transfer RouterHQ.com from Router’s GoDaddy account into our own GoDaddy account, thereby putting the domain under our direct control  We quickly made the domain registration private again in order to undo Router’s libelous statements.  The total cost of our efforts:  $7.41.

Ideally, GoDaddy would comply with our subpoena and turn over their billing records for Router’s account, which would prove that Garrett Graff is indeed the individual behind Router and responsible for all Router’s illicit acts.  But just because we filed our lawsuit doesn’t mean we’re guaranteed to confirm Router’s identity. AVC, GoDaddy or even Router could move to quash our lawsuit or subpoenas.   Only time will tell.
One thing is certain:  Since GoDaddy retains account records for at least 7 years, whoever owned the domain RouterHQ.com prior to November 25, 2009 will eventually find himself in a shitload of trouble.