Kiki Kannibal, the archetypal child who encompasses everything that goes wrong when parents buy their children a computer, will today add another printout onto the mile-high stack of death threats made against her. 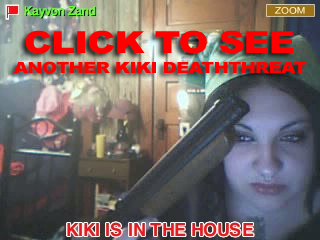 In Kayvon’s Live, Brandy Suicide’s friend ScarahTerror! brandished a realistic cap gun and darkly told viewers, “this is what I have for Kiki,” before she and Brandy acted out their disturbing murder fantasy. Brandy, who is 20 years old, plays Kiki, who is 16 years old; when “Kiki” refuses to change her cruel name-calling ways, 21-year-old Scarah shoots her dead.
While we do not condone this type of stunt, StickyDrama eagerly awaits the ballistic on-cam reaction of Kiki’s mother, who last year vowed to report Kiki’s “haters” to the Governor of Florida if they would not end their harassment of her daughter.