Melinda Cherrie made the extremely foolish decision to post a video on her Stickam account, in which she declares to be one of the girls in the FOX report. That is to say, this idiotic girl destroyed FOX’s meticulous efforts to protect her anonymity.

In the report, Melinda recounts how cyberbullies manipulated her into doing sexually explicit acts on cam, all 200 pounds of her, and then posted the screencaps along with her real name and address. A person of average intelligence would have learned to be more careful about their online identity, but not our clever Melinda. She had the brains to record a Stickam video in which she proudly points out her 15 seconds of cyberbully fame, practically drawing a bright red bullseye on herself. 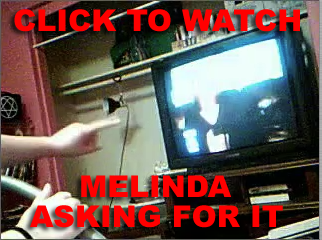 She eventually deleted the video, but not before St1ckam Lulz screen-recorded a copy, which he then sent to StickyDrama.
http://www.stickam.com/ohnoeslurkerz