First and foremost, the Center For Lollatology is extremely privileged to join Sticky – at a now elevated level – in this honorable mission of spreading unbridled sodomy on the interwebs. When it warrants, we will be proud to post on the main page and n00ds. However, we are not afraid to return to the trenches of Mydrama with other posts.

And now for business at hand. The CFL has been in fairly constant observation of Stickam since early to mid 2006 and we have seen many people come and go. We’ve laughed, cried and jacked off in privates with many of you. Never though, have we been quite so annoyed by anyone in the same way as we are with Elliot Ben. We were annoyed with him well before we were posting, but it was an itch we were able to ignore. Sticky has been seemingly merciful towards Elliot — The CFL will be doing no such thing. The story of Elliot Ben for us has been like watching an adorable little girl turn into a fat, angry, emo, bitch with bright purple hair. Precious to whorrifying.

Flashback to when Sticky showed the world Elliot Ben kissing another man, the CFL was not the least bit surprised. We were told its relatively well known in closed circles that Elliot has swungeth in both ways. We aren’t going to say Elliot has taken it in da butt, our source said that was likely out of the question. But full-fledged fellatio with a side order of cupping the balls is possible. (and with his carrot patch, trollop of a girlfriend, this only goes to supports these reports) Let it be known – The CFL in NO WAY wants to claim Elliot into our lil list-o-gays! In fact we’ve been holding 24 hour vigils for weeks pleading with our pagan gods that Elliot Ben is never truly found to be gay – as that would taint our self-image in unprecedented ways. This strays from our normal policy to applaud any sort of homosexual activity. Our one true and ultimate goal here is to find solid proof that Elliot Ben is in-fact a hermaphrodite of space alien origin as we have heard stated around the junglejuice cooler here at the CFL. 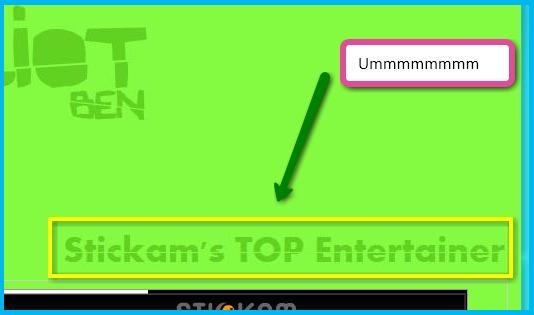 The self-appointed ‘top stickam entertainer’… (who since has removed this subtle comedy from his stickam profile – only to replace it with an even more repulsive layout) seems to think that he is sitting at the proverbial stickam cool-kids-table. This is not the case. Sorta like the testimonial in a comment left on mydrama by a real life acquaintance of Elliot Ben which illustrates Elliot’s presumptive coolness:

“i went to school with elliot when i was in high school. he actually sat at my lunch table, unwelcomed of course because he was always annoying. i was a junior when he was a freshman. so lets see, im in my second year of college, so that means he must be a senior this school year(which started in august) hes either 17 or 18. i havent heard from him after that first school year. he got expelled for going into the girls restroom.”

Now we have finally decided to itch this pain in the ass that is Elliot Ben. He showed the CFL love with a preemptive ban from his room or from messaging him. And all we wanted to get in was a simple ‘fuck you’ or ‘eat shit and die cunt’ for therapeutical lols. He even banned our pretend cuddle-buddy/confidant Andrew Bisante because he was a threat to her royal highness. We were confused at first about this but then in his live after we text and spammed his cell he made it clear. He stated that we were a ‘wannabe stickydrama who has to use mydrama for attention’. This is a fair question to address on our first post here as well. We are not a stickydrama wannabe but rather worshiper and religious-reader turned author. It is not a case of wanting attention like Elliot – but rather our own personal form of bonafide activism to persecute skanks like Elliot. When Sticky gave us the opportunity to participate with mydrama we were beyond excited to jump into that cesspool. We can understand how Elliot would be upset with our postings being that he cant post given that whole trouble with his crayons being translated digitally. But Elliot took his anger out flailing away with anonymous, negative commenting on our posts and encouraging of others to do the same. When we heard this it only made us lol more and sleep more sweetly knowing our wound was now bone deep.

Whereas in the case of Bisante, the thought of his n00ds or him and P. Skinz getting it on made us get chillz of pleasure shooting down our spine. In Elliot’s case, the thought of the taste of his sweet, succulent tears works in just the same manner. He is lacking any sort of physical appeal to us with his down-syndrom-esque face. js.

Elliot recently said he will be going live more often for the little girls who still tune in hoping his younger brother will appear. His live has all the excitement of unbuttered toast. Do watch for the hikes in teenage suicides and rise in stickam induced cases of bleeding of the eyes from watching his live. Basically the abomination which is his live has become more often than not watching the skank take calls from people he hopes can spice up his live. Other than that it will likely be hearing him complain about people, watching his friends eat cereal or listening to the muffin-top packing Elliot Ben make fun of fat people or his local news station. With new talent rapidly moving into the Stickam Arena, hopefully his time will come sooner than later.