We don’t hide it: StickyDrama is owned, run, and frequented by faggots. But not by lame faggots. Lame faggots tend to congregate in Stickam’s Gay & Bi room, and to a lesser extent in the Gay & Bi & Str8 room. Str8 readers who don’t care about lame faggot drama should just stop reading here. 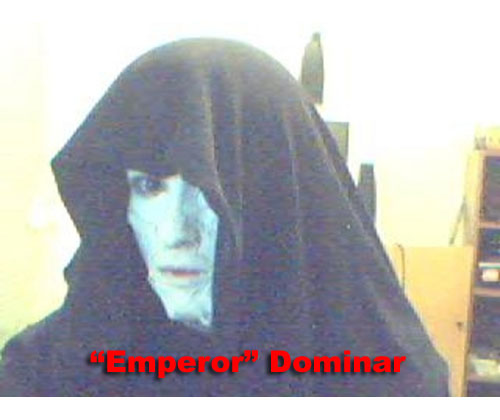 For the few who actually care to know, the Gay & Bi room used to be the only room with “Gay & Bi” in its name, and was run by a group of lame faggots known as The Empire, whose members were denoted by the tag EMP. Dominar, whose real name is Bobby, was Emperor of The Empire, which entitled him to boss around all the other lame faggots. Whoever could put up with Bobby’s bullshit was promoted to higher ranks within The Empire, and was allowed to ennoble themselves with such titles as Princess and Marquis and Lord, and The Lame Faggot Empire was born.
Pomp and ritual was an integral part of the Empire’s promotion process. In order for lame faggots to earn higher rank, members had to camwhore for Bobby. Bobby is apparently a horny lame faggot, and as a rule won’t let any other lame faggot call himself a Lord or whatever unless he jerks off on cam. (Mind you, calling oneself a Lord or a Marquis or even Emperor has absolutely no effect on one’s Stickam status; in their chatroom, like all other chatrooms, there are only regular users, mods, and the host.) Every now and then, some lame faggots would feel the need to vent their frustrations with Bobby’s rule.
CLICK TO READ IN FULL RESOLUTION

Jerking off for mod is no rare policy in any Stickam chatroom or Live. In fact, it’s probably the most common path to green status. But what made The Empire’s policy so eyebrow-raising was the formal WRITTEN “application process” by which Dominar reviewed his lame faggot underling’s fappage—a perverse degradation which ran counter to The Empire’s hypocritical mission statement: 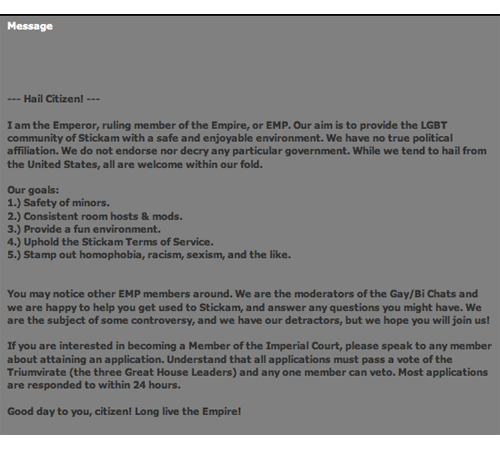 Readers can find Dominar’s n00dz on our n00dz page. We also link his xTube account.
Eventually some lame faggots had enough. They didn’t like dealing with Bobby’s attitude and strict rules, told him to fuck off, and they formed their own group, The True Fellowship (TTF, whose members hang out in the Gay & Bi & Str8 room) led at first by Angry Beaver and more recently by Rooster. The dust from the schism still has not settled; The Empire became UCA, and no one can yet figure out what the fuck that stands for. By most accounts TTF is less lame than UCA—at least StickyDrama isn’t kicked on sight by TTF mods.
Feel as though this post is pointless? You’re probably right. It’s just about lame Stickam faggotry. If you want real news, go read a real newspaper.
http://www.stickam.com/dakhar
http://www.stickam.com/Angrybeavehh
http://www.stickam.com/onlyme85