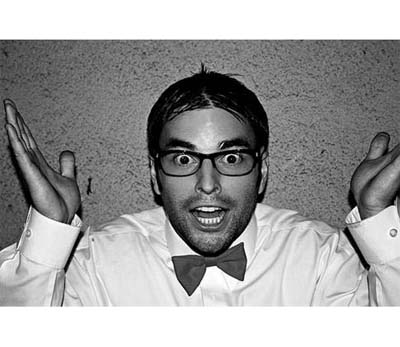 Most Stickam users are familiar with Chris Thompson, aka Jungleboy, from his brief appearance in “Stickam: To Hell and Back.”
He used to be a regular on Stickam—until LiveVideo supposedly paid him to become an exclusive host on their site. While StickyDrama has not confirmed that Chris is one of LiveVideo’s “paid content providers,” why else would anyone leave Stickam for that piece of shit site?
Yesterday Jungleboy had LV Admins ban StickyDrama from his Live. Our offense? Typing the word “FUCK” after Jungleboy had just warned a female viewer to “watch your mouth” when she told him he was “fucking hot.” That was our first and only statement in his Live, and we not streaming any image or video.
How lame. And hypocritical—when he says it himself, his response is “F-bombs happen.”

While we would ordinarily agree that a host may kick or ban any user for any reason they see fit, nothing screams “douche” more than banning for one utterance of the F word.
StickyDrama would never suggest that our readers spam the douche’s Live with such phrases as “STICKAM IS BETTER.” But if someone did, we wouldn’t complain.
http://www.livevideo.com/Jungleboy
http://www.myspace.com/jungleboy2
http://www.stickam.com/profile/jungleboy2
http://youtube.com/user/supricky06