Leo Laporte, Stickam’s highest-ranked yet most boring Entertainer, finally did something worth posting on the Internet’s gossip site of record.

Yesterday on the Gillmor Gang—a techie discussion group of sorts—Mr. Laporte blew up at TechCrunch blogger Michael Arrington. At issue was Arrington’s accusation that Laporte gave the Palm Pre an “overly positive” review because he received the device as a free, permanent gift which he kept for himself. Arrington claims that the proper procedure would have been for Laporte to return the device after reviewing it. Arrington flat-out called Laporte’s cozy relationship with Palm a “financial conflict of interest.” That charge elicited an unprofessional explosion of expletives from Laporte, including the Queen Mother of Cussin’, the F word.

Later, when Laporte had regained his composure, he clarified his position: “Ive worked for 30 years to prove my integrity. Mikes insinuation that I was somehow on the take with Palm was about the worst insult you can offer any technology journalist.” However he did apologize (it is unclear whether the apology was directed to Mike or to Leo’s fans) and added, “I’m embarrassed by my overreaction.”

However, the rapprochement did nothing to mollify Laporte’s outraged fans, who swamped Arrington’s own blog with death threats. Arrington deleted most of them, but left up this one: 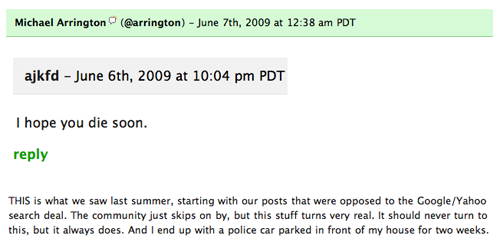 Eventually, the harassment became so bad that Arrington felt it necessary to disallow further comments on his blog. Frankly, Michael, if you think THAT’s rough, you wouldn’t survive 5 minutes on StickyDrama.