Such are the accolades KIMATV CBS News heaped upon Nathaniel Roberson, whose Myspace and Twitter layout sites Unwritten, Revolver, Bebop, Heartbreaker and Vintage Layouts are rumored to earn the Selah, Washington teenager approximately $50,000 per month.

Longtime StickyDrama readers know that Nathan’s financial success is only part of the story.  Using the online sobriquet NathanAmazing, he routinely harasses, stalks and demands on-camera sexual performances from countless male Stickam and Myspace users.  (Nathan is gay.)   But while online sexual predators such as John Hock and Richard Heartstealer eventually received their IRL comeuppance, the mainstream media has instead placed Nathan on a pedestal—and as the proverb goes, “the higher the pedestal, the darker the shadow.”

Whereas Hock and Richard were attractive scene boys who seduced female minors into having consensual but unlawful sex, Nathan was not blessed with good looks:

No, Nathan relies on intimidation and blackmail to satisfy his sexual desires.  Usually his first step is to learn his victim’s phone number, whether by asking around online or by befriending the victim.  Working from a phone number, he is often able to learn the victim’s home address, full legal name and even their Social Security Number.  He then threatens to shut off the victim’s phone and electricity service, as well as ruin the victim’s credit score, unless the victim masturbates on camera for him.  The threats come in the form of a constant barrage of messages sent via AIM or cellphone texts or chatroom PMs.  (In point of fact, Nathan himself has few true “hacker skills.”  Just as he hires designers and programmers to build layout sites, he also hires hackers to carry out his orders.  In particular he is known to have hired Ori Sherf, a hacker located in Israel who has no concern for the laws of the United States.)

A true sadist, Nathan is turned on by bullying boys into sexually degrading acts.  He coerced Andy Br00t4l into digitally penetrating his own rectum, then sent StickyDrama caps of the incident in order to boast.

Another victim, Nick of Radiation Year, consented to a videotaped interview in which he describes Nathan’s persistent harassment.  The unrelenting nature of the threats, the frustration of having his phone shut off, the fear of having his Social Security Number misused—all of these factors influenced Nick’s decision to acquiesce in Nathan’s demands.

Nathan’s online malevolence has gone beyond sexual extortion.  He also harasses popular internet personalities, in hopes that their endorsement of his layout sites will increase his ad revenues.  If an e-celeb refuses to endorse his layouts, he threatens to have their Myspace or Stickam profiles hacked or deleted—often succeeding.  Popular entertainers such as Dennis Hegstad, Plastic Martyr and Kiki Kannibal have dealt with such harassment. 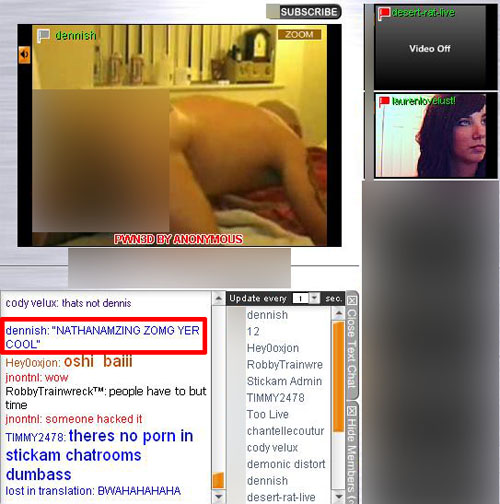 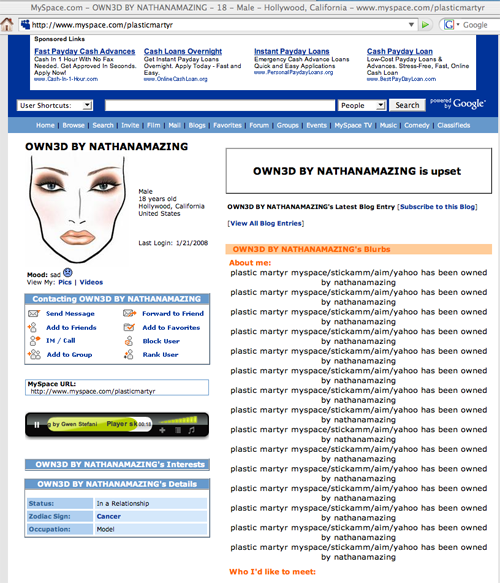 The shadiness doesn’t stop there.  Aaron Dot Jpeg, the graphic artist who designed Ownage Pranks’s website and StickyDrama’s logo, claims that Nathan owes him $5000—only one-tenth of the monthly revenue his layout sites supposedly earn—and has refused to pay Aaron for over a year.  Aaron plans to sue Nathan and his mother in Small Claims Court to collect his money. 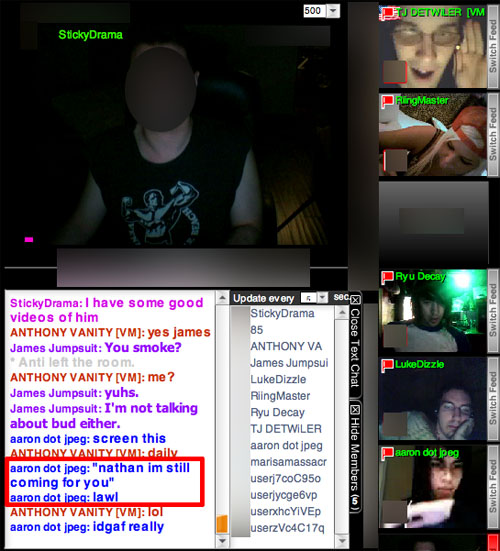 Normally StickyDrama does not post personal information on this site.  However, we have no such qualms posting the contact information for a business—and Nathan operates his layout sites through NJR Networks, LLC.  NJR’s headquarters is none other than the residence of Nathan’s mother Shelly Roberson, with whom he lives; her address is publicly available on the Washington Secretary of State’s website: