So many comedies and tragedies unfold on Stickam, the site at times seems an amphitheatre for the Digital Age, where thousands come to be amused by the histrionics of their favorite online characters. For months StickyDrama has blogged on the intrigue of the e-famous. But have television writers entered the fray, sanitizing distinctively “sticky dramas” for broadcast cable?

iCarly is a Nickelodeon series revolving around the title character Carly Shay, star of her own webcast produced by her best friends Freddie and Sam—who resemble our own Adam Paranoia and Pretty Nicki. But it’s really NathanAmazing who should sue for the character Nevel Papperman, a shameless Xerox copy of Stickam’s most fearsome buttpirate. 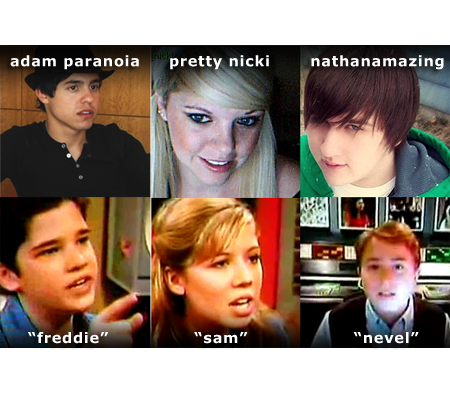 In the episode “iRue the Day,” Nevel, whose website Nevelocity.com receives five million page views per day, shuts down Carly’s webcast. The hack was an act of revenge: He had earlier confessed to having crush on her, and she told him the feeling wasn’t mutual.