StickyDrama was taking the subway back home from Ikea with Amor Hilton and Parker Tammen, when guess who we bumped into!
Pretty Nicki, the voluptuous 27ish-year-old single mother who’s probably having a whole lot of fun with Cody Collier, known by his online sobriquets Too Live and coll1er. While Cody has been laying low for a year or two, at the zenith of his online notoriety he hacked the bejesus out of Stickam; and he was even associated with the infamous Comcast hack for which teenage hacker Defiant was indicted.

“You know we’re not dating, right,” Nicki blurted out immediately after we asked Cody’s age, without our asking anything about whomever anyone was dating.  Hmmm.  Let’s pull a still frame from that exact moment, just for lulz: 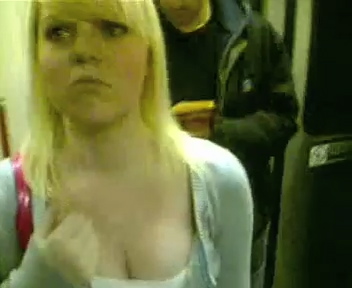 Off-camera, she continued that they were just friends. *Snort!*  Right.  Because you know how many 17-year-old boys have nothing better to do with their weekend than take their 28-year-old friend’s 4-year-old kid out for a trainride.  (We have blurred her child’s face out of the video.)  Well that’s probably for the best, since any sexual relationship between the two would be statutory rape in California, where the age of consent is 18 years old.
Cody, meanwhile, said he’s now living in LA, presumably so he can give Nicki’s kid trainrides all the time.  Isn’t that gentlemanly of him?
http://stickam.com/nicki
http://twitter.com/prettynicki
http://stickam.com/hacker
http://twitter.com/coll1er