John Hock’s viewers (and hecklers) might have noticed his new beauty mark. 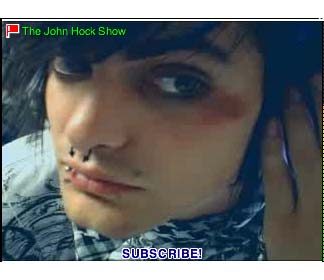 The shiner was apparently delivered by Drew Deviation, with whom a very drunk Hock was recently hanging out. At the home of an unknown person, Drew went Live and began recording Hock … but not the fake, shallow braggart who hosts The John Hock Show. No; Drew preserved a rare glimpse at the immature, out-of-control mess that is the real Hock, the Hock that emerges when the webcam is turned off.

Sources close to the subjects describe how later that night, Hock became more violent and lunged at Drew. Drew, in self-defense, threw the bellicose male prostitute into a stove—giving Hock a black eye. In his Live the following evening, Hock claimed to have no memory of those events, appearing shocked and appalled by his disgraceful actions.
Interesting to note that Hock was so intoxicated, he claimed to be 24, then 22, and then again 24 years old. If this is true, then his numerous sex crimes against minors become a more serious matter: Most states consider a larger age discrepancy between victim and assailant to call for a more severe punishment; what would have been a misdemeanor could easily become a felony.
http://www.stickam.com/drew
http://www.stickam.com/johnathonhock