Wednesday of this past week, OwnagePranks pushed his routine a tad too far for Stickam’s taste, and his account was banned until last night. Ownage had called a Walmart employee and, while Live, pretended to be a black man molesting an infant. 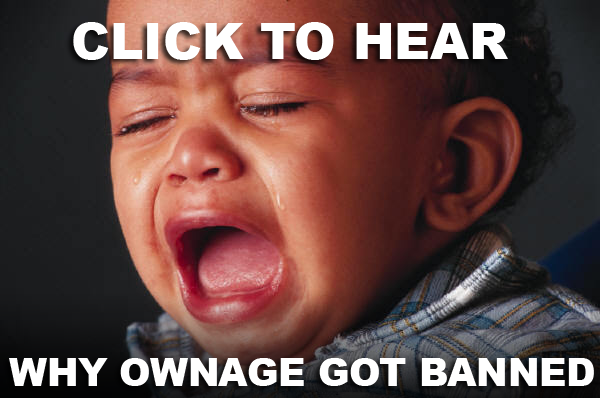 PLEASE NOTE THAT THE INFANT’S CRIES WERE A PRE-RECORDED SOUND EFFECT.
Banning a user for speech alone is relatively unusual and raises a variety of legal and philosophical questions, namely whether online speech should be censored at all. Our readers will recall that Foxxx was not banned but rather heavily promoted for giving a platform to Shirley Phelp’s vitriolic homophobia. Apparently the eroticization of children is too scandalous for Stickam, whose corporate parent DTI Services operates wholesome websites such as DxLive.
Ownage’s account was restored after he swore to Admins that he would never again violate TOS, which prohibit “objectionable” content.
StickyDrama is no fan of prank calls, which we find get out-of-hand very easily; they are by their very nature “objectionable.” But Stickam features pranksters like Ownage and PCR knowing full well their routines, thereby condoning them. If the company promotes some pranks but not others, the limit of what is acceptable should be clearly articulated.
http://www.stickam.com/profile/ownagepranks

A Bright Future Ahead of Her