John Hock is, for lack of a better word, fucked.
StickyDrama awoke this morning to read a shocking support ticket from our web host:  The Phoenix, Arizona Police Department had served the host a search warrant.

Friday May 22nd, 2009; 4:39 PM CDT
Customer,
Due to the execution of a Search Warrant from the Police Department of Phoenix, Arizona your server will be offline until further notice.
Thank you for your patience and understanding.

We’ll be honest, we almost shat our pants.  But our fears proved unfounded:  The police were actually investigating John Hock.  Facts are still trickling in, but it seems that the police are after our screen-recording of his live sexual assault:

StickyDrama did not post nor upload the recording to our server, and police came away empty-handed.
We could not help but feel the handling of the warrant was … well … rude!  We would have happily handed over our recording to the police, had they only asked us.  But instead of sending a courteous email, the police took our server offline without warning.  The only effort Phoenix’s police made was to post an anonymous comment with no email address, which of course went unnoticed for months.
Well a fat lot of good that did them.  We never uploaded or posted the recording, because we didn’t think it necessary to expose the poor girl’s pussy again.  But anyway StickyDrama did our civic duty today, and mailed Detective Allbright a CD containing the Quicktime recording. 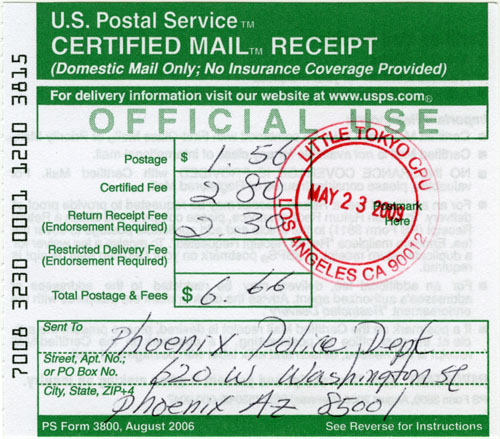 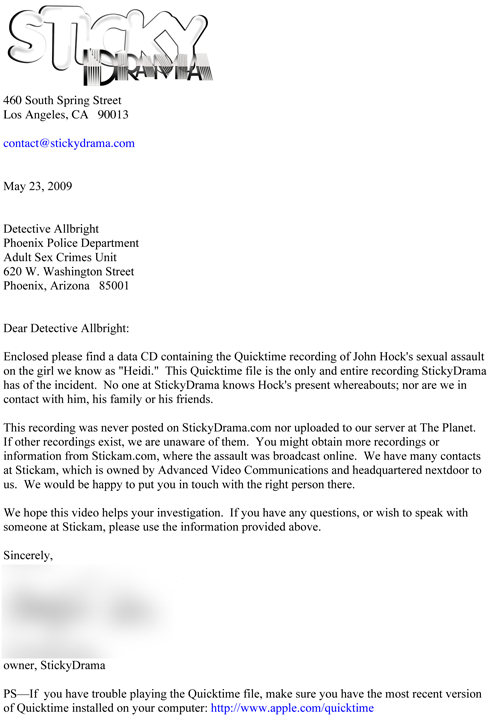 Hock’s whereabouts are unknown.  Rumor has it—and by that we mean Amor blabbed—shortly after the assault, Hock fled his mother’s Arizona home and has been in hiding ever since.  However, he’s been still logging in to his Stickam account as recently as this week.