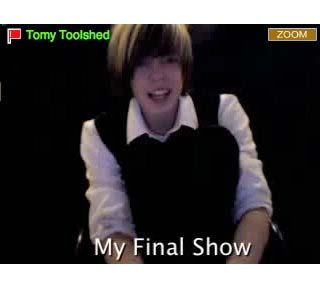 StickyDrama is unsure exactly how many times Tomy Toolshed has announced that he was leaving Stickam, but for laughs let us assume this time is for real-real, not for play-play.

He laughed, he cried, he unfortunately tried to sound philosophical; that much was to be expected. What was unexpected was his gay dancing to the gayest songs in existence.

When asked directly why he was leaving Stickam for good, Tomy replied via PM: “Im focusing on my life and making my father proud of me … and this is a distraction, an unneeded one. All I’m striving for is to make my father proud .. so i can hear him say for once ‘I’m proud of you Tomy’ … thats all I want.”
All very touching, but is it complete and total bullshit? His ex-girlfriend Britni says so, and her version of the story is corroborated by 16-year-old Angelica Applesauce. According to them, Tomy cheated on Britni with Angelica when he and Britni were still together. Angelica provided StickyDrama with lengthy AIM logs and a written account of her experience, and our readers may be assured that they’re juicy as fuck. Nevertheless we find it imperative here to mention the most salacious detail of all, quoting Angelica verbatim:
“I said no 4 times when he was trying to get down my pants before i gave up…. He didn?t even ask about a condom. Not one time. He said he would pull out. Which the funny thing is he did like 5 times. He cummed all over the room. He didn?t even clean his shit up.” 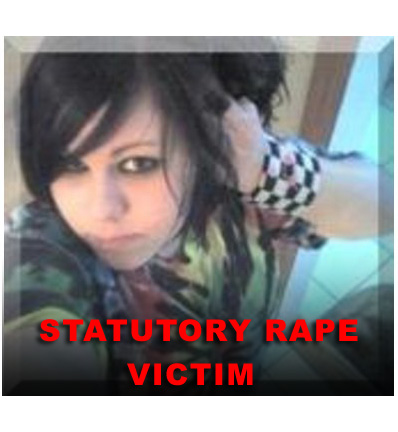 Angelica, who was then and is still 16 years old whereas Illinois’s age of consent is 17, pinpoints the date of their tryst as December 18, 2007. Since she was under 17 years of age at the time but older than 13, and Tomy was legally an adult not more than 5 years older than she, he is guilty of a “criminal sexual abuse,” a Class A Misdemeanor under Illinois statute 720 ILCS 5/12?15.
Contrary to Tomy’s figure of 35 years, the maximum punishment he faces is 1 year in jail, a $2500 fine, or both.
http://www.stickam.com/tomytoolshed
http://www.myspace.com/tomytoolshed