“You always end up right.”
With those words, Amor Hilton became the first girl to give StickyDrama an orgasm since … well, a very, very long time. 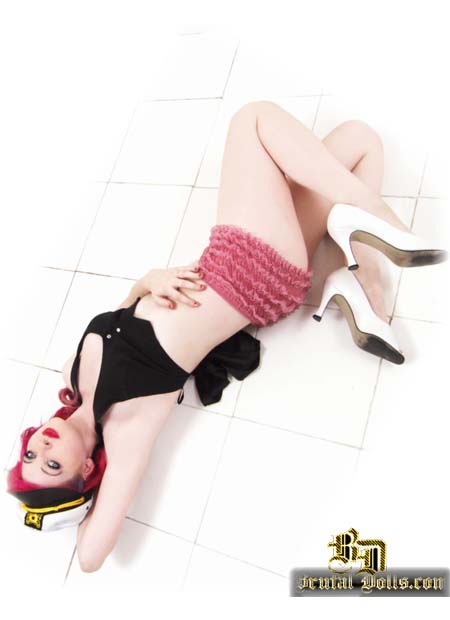 We’ve been chatting on and off with Amor in the aftermath of what we hope to be her final breakup with John Hock, gathering details here and there. We first began posing questions when she popped up unexpectedly in our chatroom, on Tomy Toolshed’s account no less:

She appeared with her brother, who has been helping Hock produce his show on Stickam. The two jokingly argued whether he would continue to do so, now that Amor is no longer with the scumbag.
Amor was initially circumspect in her online statements about her statutory rapist ex-boyfriend. Despite our best efforts, she would not engage in the same tactics Hock had stooped to during his show—our readers will recall it was Hock who immediately began calling Amor names, in particular a “brick on a leash.” Her one on-cam comment: “As soon as he can get some help—because he has some issues— then we can have a friendship maybe.” Later on AIM, though, she explained why she described her relationship with Hock as “abusive” in a Myspace bulletin: 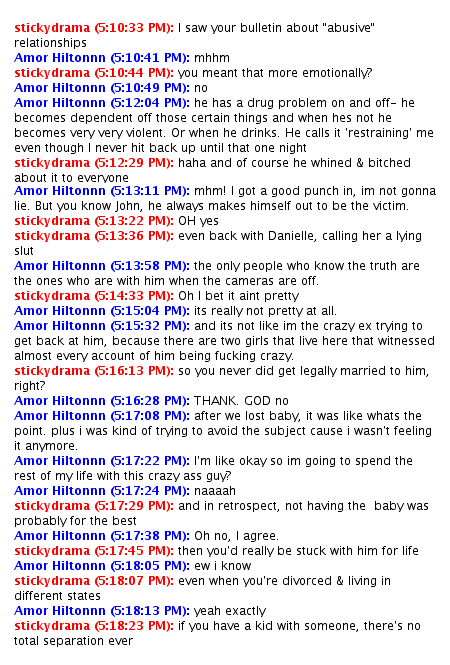 She debunked several rumors. First, she denied the existence of a sex video she and Hock had made; while they did record one, she claims it was deleted from the camera. Second, she addressed the rumor, started by Hock, that she had slept with another boy while Hock was still living at her apartment. That boy, Animal Suit Hijack, is just a friend with whom Amor was cuddling; Hock walked in on the two and overreacted. “But we were broken up anyway,” she added, “I can lay down with my friend if I want to.”
Amor also confirmed a few rumors—namely that her couch might soon become Tomy Toolshed’s next bed. When asked whether the relationship was strictly platonic or not, she left little doubt: 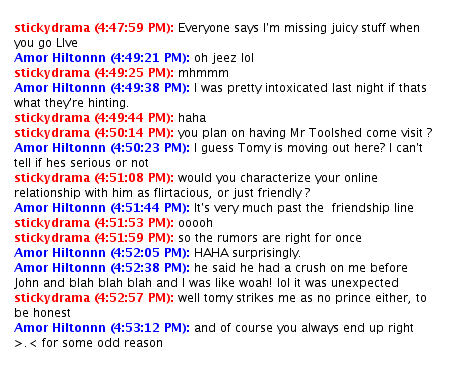 Speaking of sex, Amor told her own version of the so-called 3some between her, Hock and October Hallow. 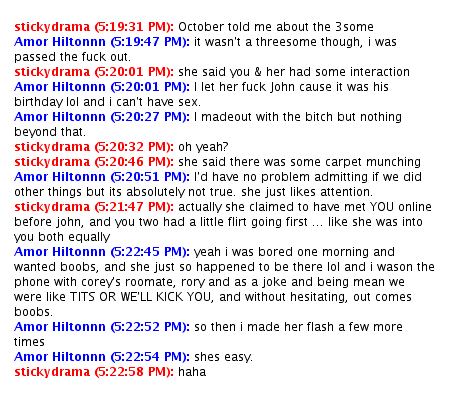 Lastly, she weighed in on the growing debate of whether the AIM screen name itsjohnhockkkk is actually used by John Hock. To the best of her knowledge, John has never used that SN, and whoever is using it is an impostor that has fooled many Stickam users, including top-ranked Entertainers.
While satisfied that we’ve answered our readers’ immediate questions concerning the most eagerly awaited breakup in online history, StickyDrama cannot help but suspect there remain some undisclosed scandals. Like who is the old man PWNing the rapist’s ass in exchange for sponsoring the John Hock Show? Whoever he is, that’s one rich old queen who must not have heard of Craigslist. If gay prostitution will fund a webcast, we’re sure there are plenty of other younger, more talented, and tighter boys in Los Angeles, waiting to be discovered.
http://stickam.com/amornicholaihilton