As Elliot clearly states on his Stickam Profile:

Wondering who Elliot Weisberger is? Well, he isnt worth your time unless you like his Pokemon surprises from his deep, loose asshole. But if you just want the quick & to the point summary, the Urban Dictionary did a truly marvelous job: In his spare time he likes to be cast in plays at Clay High school like The Wizard of Wonderland as the South Bend Tribune writes (backup). Im sure that was precious if the fggt was cast correctly as one of those flying monkeys. Had I known you were so close to Notre Dame Elliot, Id have stopped over for some sexy martinis with you after the game, maybe finger you a lil bit?!

E & M Creations (Elise and Martin Creations) is apparently run straight out of Elliots house! Our best educated guess is that it really just a scam bizz probably for laundering money and keeps Elliots internet connection going. (Partially joking – its likely a fake business for write-offs to save money. Unless of course his parents really run a business with just the two of them as general contractors for single family houses) Apparently hes also packing a criminal record in multiple states, but I didnt care to pay for those records, or smear him too badly being that it wasnt exactly his choice that genetics took a holiday on that fateful night Elliot was conceived in a stagnant brew of rotten semen and runny vagina mucous.

Elliot, I have an idea, go back over to your emo_fag podomatic account and do podcasts You never created a Stickam for fun, but only for your pursuit of fail fame. Your friends at your school pushed you away for long enough that it bored you into thinking you could make it your online profession, you FUCKING loser.

See you on Stickam in the future when your career blossoms into all you can be: 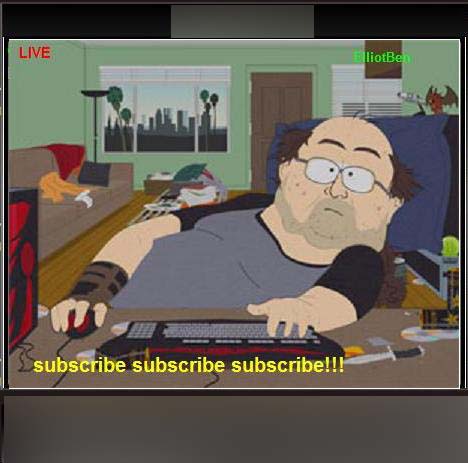 Listen to your ex girlfran d00d: Just get your crayon set back out and go do podcasts about all the lil Pokemon hiding in your asshole. And stop talking shit to me on AIM! Keep runnin your mouth cunt, just not to me. <333333 Have I gone too far? I know hes young but hes such a lil fuck head.

(None of these posts are guaranteed to have correct information – nor does the CFL give a damn about that.)

Pardon Us While We Rofl