The feud is back on! Jeffree Star banned Anthony Vanity from his Live Saturday night, and then brandished a rhinestone-covered toy gun and threatened to “shoot [him] in [his] motherfucking head.” After Anthony had been banned and couldn’t defend himself, Jeffree called him “fat,” “ugly” and “poor.” 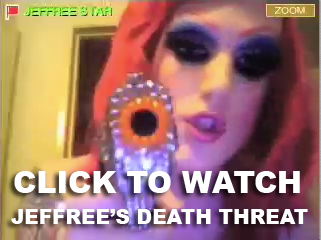 While it’s unclear whether Jeffree’s actions violated any law or Stickam’s TOS, had Jeffree done the same in real life, Anthony could have legally shot him dead by claiming that the gun looked real. Toy guns have been responsible for dozens of fatal shootings thoughout the years.
In point of fact, Anthony only came into the room because annoying young cocksucker Arthur Ford was claiming that he had recently trashed Jeffree, which was not the case as Petey Plastic realized: